The idea for BrightPlayer originally came from a Reddit post in /r/jailbreak, where a jailbreaker pitched his tweak concept to any interested developers out there. The result is a handy little jailbreak tweak for adjusting display brightness and toggling rotation lock from the iOS video player.

BrightPlayer is a great example of a simple tweak that adds a small amount of convenience to a certain area of iOS. I’ve quite frequently found myself having to invoke Control Center to up my display brightness when launching a video, and all too often I’m toggling rotation lock to keep the video in landscape. BrightPlayer fixes these issues by adding options for both screen brightness levels and rotation lock directly into iOS’s video player…

After the tweak is installed, a brightness slider is automatically applied to the right of the video play/pause/skip controls. If you also want the orientation lock toggle to appear, you’ll have to visit BrightPlayer’s settings panel and flip a switch to enable it. A respring isn’t required to apply the setting, but any open video players will have to be closed via the “Done” button and reopened for the rotation lock button to appear. 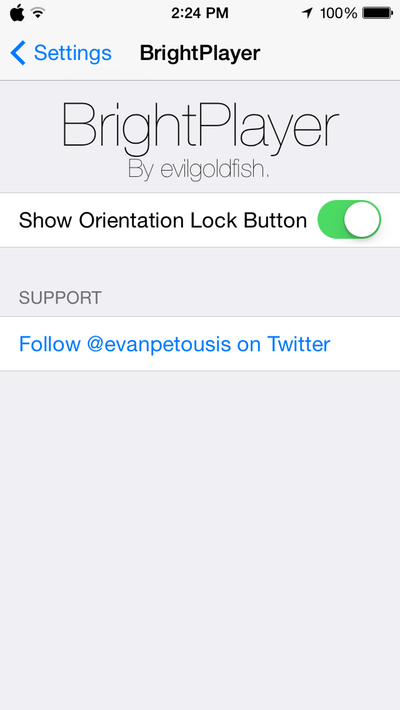 It’s important to note that BrightPlayer isn’t compatible with RotateVideo, but this shouldn’t pose much of a problem, as BrightPlayer contains similar functionality with the addition of a brightness slider. There are no indications as to what iOS devices or versions of iOS it supports, and it doesn’t seem to be compatible with any custom video players, but BrightPlayer does work well with apps that use iOS’s stock player.

Overall, the tweak is simple but convenient – the kind that makes jailbreaking what it is. BrightPlayer isn’t going to change the way you use your device, but it is likely something you’d miss after going back to stock iOS, and frequent video watchers are sure to appreciate this tweak.

BrightPlayer is completely free in Cydia’s BigBoss repos, so go ahead and give it a try. Let us know what you think in the comments below!