Although it’s been around for a while, handyPhone is an incredibly useful tweak that seems to have gone largely unnoticed by the jailbreak community, despite its beneficial functionality. Admittedly, the description and screenshots of this tweak in Cydia are somewhat cryptic, and anyone not already familiar with the concept behind handyPhone might pass it by without a second thought. However, this tweak is truly a gem, bringing some great new features to the Phone app…

handyPhone has several elements to explore, but my personal favorite is its usage of the T9 keypad. T9 stands for “text on 9 keys,” which is the placement of three or four letters on numerical keys for typing without a Qwerty keyboard. If you’ve ever sent a text message or entered a contact’s name on a flip phone, you were using the T9 keypad.

iOS has this built into its Phone app, and you may have used it for dialing phone numbers synonymous with words related to a company – for example, 1-800-MY-APPLE. However, handyPhone takes its functionality to the next level by allowing jailbreakers to quickly locate a contact by typing someone’s name with the T9 keypad, or their number with the numerical keypad.

To demonstrate this concept, let’s say I’m dialing my contact, Sebastien, whose number is (555) 123-4567. If I have his number memorized, I can begin typing “5551” in the Phone app, and his name will appear as soon as it is the closest match. That is, if someone else in my contacts has a 555 area code, handyPhone may bring them up first, so I can continue typing Sebastien’s number until his full number is auto-filled by the tweak.

If I’m unsure of Sebastien’s number but don’t want to search through hundreds of contacts to find him, I can begin typing “732,” which is synonymous to “Seb.” If that doesn’t bring his number up, I can simply continue spelling out his name on the T9 keypad until he is the only match. If multiple contacts have similar names, or if a single contact has multiple phone numbers, handyPhone lets you easily swipe through all matching numbers and call the right one.

Another subtle feature is that the tweak will not only search from the beginning of a number, but from the middle as well, meaning you don’t have to type an area code and get the results of everyone from a section of a state, as you can also begin within the latter seven digits of their number. Clearly, handyPhone is an incredibly effective way of speedily finding one contact out of many.

The tweak also relocates a button to the bottom of the dialer that allows for quickly adding the dialed number to a contact or making a new contact altogether, which can save you the time of having to pull up a contact sheet when you want to quickly get someone’s number in your phone. To be clear, stock iOS already has this option; the tweak simply relocates it, along with the backspace button.

Something to note is that handyPhone’s “predictive search” functionality can be disabled from within the Phone app at anytime, which temporarily returns dialing to its normal state.

handyPhone’s Settings panel adds a few additional features, including the options to vibrate when a call is answered, add a Decline button on the lock screen for FaceTime calls, and to add an Ignore button on the lock screen for phone calls. There’s also a toggle for something called “Quick Swipe,” which enables left and right swipes on entries in the Contacts view for quickly calling or messaging someone. Additional toggles include options for Chinese users, including Area Info and PinYin type on the T9 keypad. 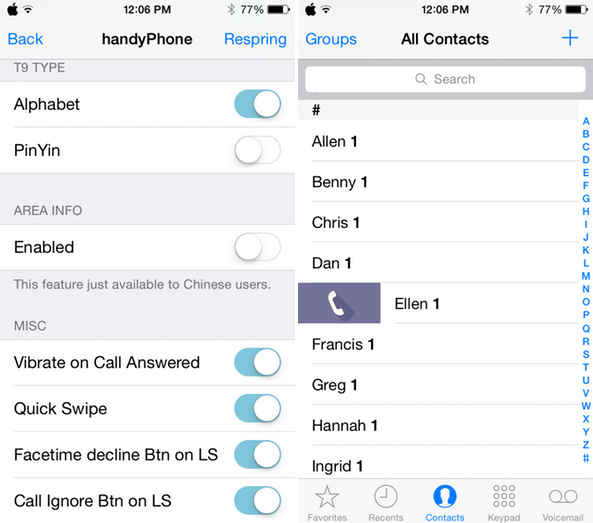 Available on all versions of iOS 7, handyPhone is only compatible with iPhone 5 or newer. The tweak is disabled by default when it’s first installed, so users must enable it from its panel in Settings.

As far as practicality is concerned, handyPhone is one of the best – if not the best – tweaks for the Phone app. Whether you want to quickly tap out a name or number on the keypad or scroll through your contacts and swipe to initiate a call or text, handyPhone makes it possible.

The best part is that handyPhone is completely free, so you owe it to yourself to grab it from Cydia’s BigBoss repo.