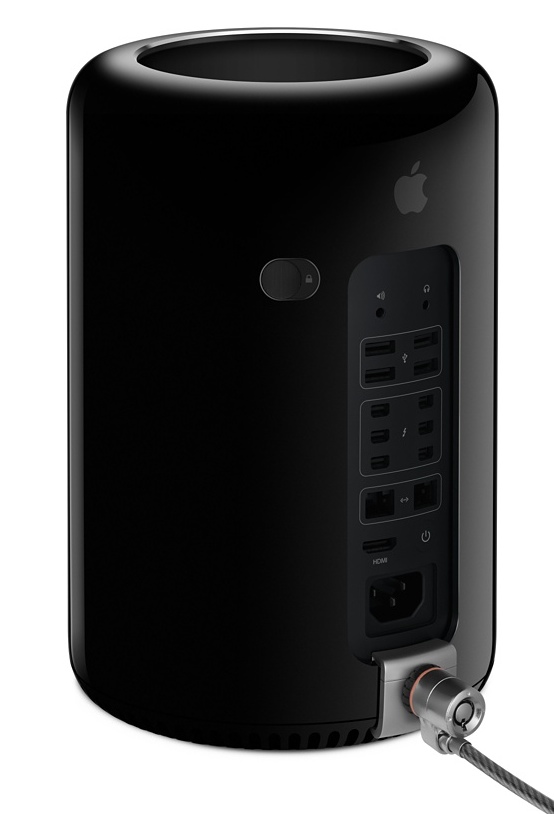 Available through the Online Apple Store for $49, the Mac Pro Security Lock Adapter ties the cylindrically shaped workstation to your desk using existing Kensington locks or similar third-party locks, so a thief would need to drag the desk itself to steal your precious Mac Pro.

Moreover, it prevents unauthorized access to the computer’s internal components by securing the lift-off cover to the base of the machine with a security cable…

The accessory simply clamps on to the machine’s pedestal and aluminum case, no need for special tools or modifications whatsoever.

“The cable lock can then of course be secured to a bulky object or dedicated security ring found on some desks to make it difficult for thieves to steal the machine,” explained MacRumors, which first caught wind of the adapter.

A lock is not included in the package.

The Mac Pro Security Lock Adapter lets you use a compatible Kensington or similar style third-party lock (sold separately) to keep your Mac Pro secure. The adapter attaches without tools and does not modify or damage the Mac.

With a compatible lock connected, the Mac Pro Lock Adapter secures the housing to the enclosure, preventing access to internal components.

With an official, Apple-branded solution now in tow, security-minded users no longer need to build custom locks, buy expensive solutions or opt for silly solutions such as software-based alarms that go off when a machine is detached from a local Ethernet network.

If I were a happy owner of a brand spanking new Mac Pro, I’d simply lock it in a cabinet away from prying eyes and enable Find My Mac.

But hey, what do I know?