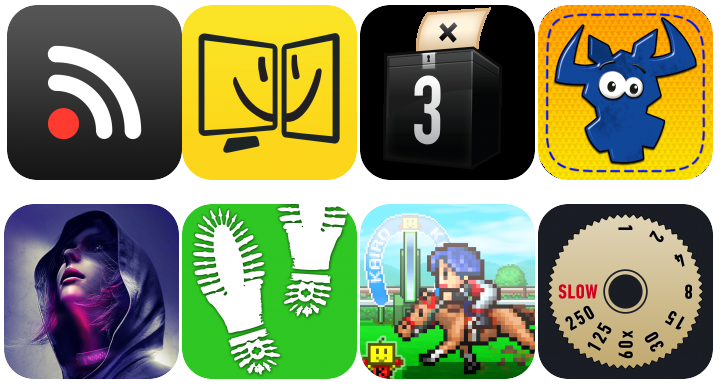 It’s hard to believe that the sixth anniversary of the App Store is in just one month. I still fondly remember being a fourteen-year-old kid and downloading Super Monkey Ball on my original iPod touch. It’s unbelievable how quick time flies, but we’ve certainly come a long way since those days. The quality of apps, and especially games, on the App Store is unparalleled compared to what was available six years ago. Look no further than this edition of App Recap, which covers the best new, updated and discounted apps for iPhone and iPad. We’ve got 8 apps to look at today…

Unread for iPad is a new RSS reader for staying connected with the latest blogs and writers online. Shawn Blanc called the app “refreshingly simple and elegant,” and Federico Viticci was impressed by its “fantastic mix of elegant typography” and “intuitive gesture-based, one-handed navigation.” Unread for iPad is $4.99 on the App Store for iPad.

6 takes! is a simple card game that was released over the weekend. The aim of the game is to avoid getting cards, since each card you pick up costs you points for each bullhead on it. The player with the fewest bullheads at the end of the game is the winner, but it definitely sounds easier than it really is. 6 takes! is $1.99 on the App Store for iPhone and iPad.

If you’ve ever wanted to run a country, be a president or prime minister or do a better job than current political leaders, Democracy 3 is a new app for you. With a unique user interface, the app is designed for visualizing the connections between laws, policies, voting groups, political parties and situations. Democracy 3 is $9.99 on the App Store for iPad.

Slow Shutter! is an app for capturing long-exposure photographs, allowing you to create beautiful photos of moving objects with features normally found on DSLR cameras. The app has received a major update, with version 2.0 redesigned from the ground up with an iOS 7 design, three modes, full photo resolution support and more. Slow Shutter! is 99¢ for iPhone and iPad.

République was pushed to version 2.3 recently with a new story mode, providing an easier experience recommended for players who just want to explore environments and enjoy the storyline. A number of bug fixes were also made. République is still free on the App Store as Apple’s App of the Week until Thursday, and it is a universal app for iPhone, iPad and iPod touch.

iDisplay allows you to turn your iPhone, iPad or iPod touch into an additional display for your Mac or Windows computer. Advertised as the perfect tool for multitasking, the app has been discounted from $9.99 to $1.99 for a limited time. In other words, get downloading. iDisplay is $1.99 on the App Store during the sale, and it is a universal app for iPhone, iPad and iPod touch.

Lumen Trails Organizer+ has been discounted from $9.99 to absolutely free for a limited time. With over 1 million users worldwide as of June, the app is a daily workout timer, calorie counter, journal, exercise and fitness tracker, food diary, diet planner, budget and expense tracker, day planner, to-do list checklist, sleep time log and more. Free for iPhone and iPad.

Pocket Stables has been discounted to $1.99 to celebrate the launch of Pocket Harvest on the App Store. In the game, manage your very own ranch, train racehorses to win in big races, build training facilities like dirt courses and pools, increase your ranch’s fame, entice visitors and more. Pocket Stables is $1.99 on the App Store for iPhone and iPad.

There wasn’t the biggest selection of apps and games to highlight in this edition of App Recap, but the column should pick up speed as the week progresses. A major update to Skype is on the horizon, and an impressive lineup of new games are set to hit the App Store on late Wednesday night. If there are any apps that you feel we missed, give us a shout in the comments section below.

So, Super Monkey Ball was my first app. Do you remember yours?