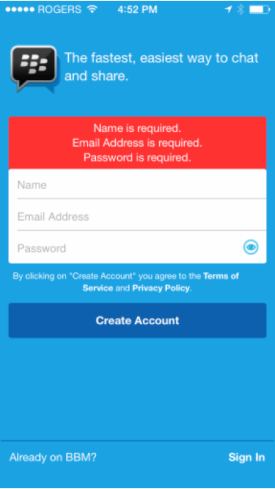 Remember BBM? Good, because Canada-based BlackBerry has announced on its blog a new version of its free cross-platform messaging application coming.

The software is about to get a nice little update for iOS and Android aimed at removing some of the friction associated with signups and friending, new emoticons and more. Jump past the fold for the full breakdown…

As evidenced by the screenshot at the top, gone is BBM’s clunky and downright ugly signup screen as BlackBerry has totally revamped the signup experience.

“Our goal was to make it simpler for new users to join the BBM community and to make it faster and easier to add new BBM contacts,” noted the firm.

The two-fold improvement includes a much easier sign up and friending. Previously, the signup screen was populated with numerous fields that needed filling and now you’ll only need to provide your name, email and password to start using BBM.

Yes, no more BBM PINs, it would seem!

As for an easier friending, BlackBerry admits that today’s experience is – in its own words – “somewhat cumbersome and complicated”. Therefore, the new version will see to that by simplifying BlackBerry’s invite email which will contain an URL that the recipient can simply click to get on your list of BBM contacts.

Yes, no need to send a PIN invite back!

Among other changes, BBM 2.2 will come with sixteen new emoticons (pictured above) and a renamed Updates tab which shall be henceforth known as Feeds “to better represent what you find there”: the latest statuses and profile photos from your BBM contacts and the newest posts from the BBM Channels you follow.

We’ll make sure to keep you in the loop and tell you when BBM 2.2 lands in the App Store. According to BlackBerry, the updated app will land “in the coming days”.

In the meantime, you can download BBM free in the App Store and give it a whirl, if you haven’t already.