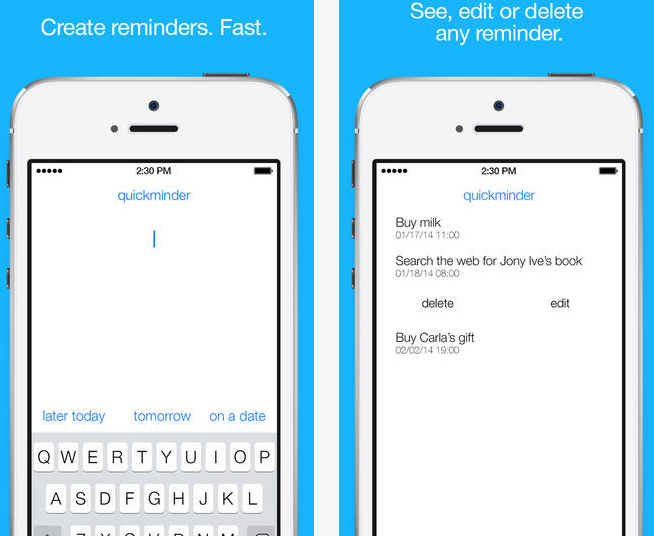 Reminder apps are fast becoming the new Twitter app in that it seems everyone is having a go at making one, and the App Store is full to the brim with both some great alternatives to the stock iOS solution. Unfortunately, it’s also littered with some downright poor ones.

A reminder app is a very personal choice, too. Some people will love one app while others will declare another to be the one and only app to use for making sure you don’t forget things. While we’re fans of the likes of Omnifocus and Things, it’s safe to say that both apps can sometimes be overkill for many, and downright madness for others.

Which means that reminder apps can still thrive in an area dominated by the two aforementioned apps along with a handful of smaller solutions. One of our new favorites, quickminder, has found a niche for itself thanks to its blazing speed and luscious looks. And yes, that’s their lack of capitalization, not ours.

When you first launch quickminder after paying your $0.99 for it, you’ll be greeted by what can only really be described as a sparse interface. And that’s a good thing, because this app specializes in letting you get your reminders down quickly and easily, with the minimum of fuss. It’s a concept that’s already been done with text by the wondrous Drafts app, and quickminder has brought the same philosophy to reminders.

It’s not as basic as just a load of rows of text though. Quickminder allows the setting of times and dates for reminders, and even has programmable shortcuts that will let you choose a time either later today or tomorrow without ever seeing the iOS date/time picker. Remember, it’s all about speed.

You can see a list of all your reminders should you so wish, and apart from the main text-entry view, that’s all you’re going to find. The word sparse can often be used in a negative way. We’d still say that quickminder is sparse, and in a very good way. If you like Drafts, Due or other apps that do things without making you jump through hoops, then you’re going to like quickminder.

And at a dollar for both iPhone and iPad apps in one universal solution, what’s not to like?