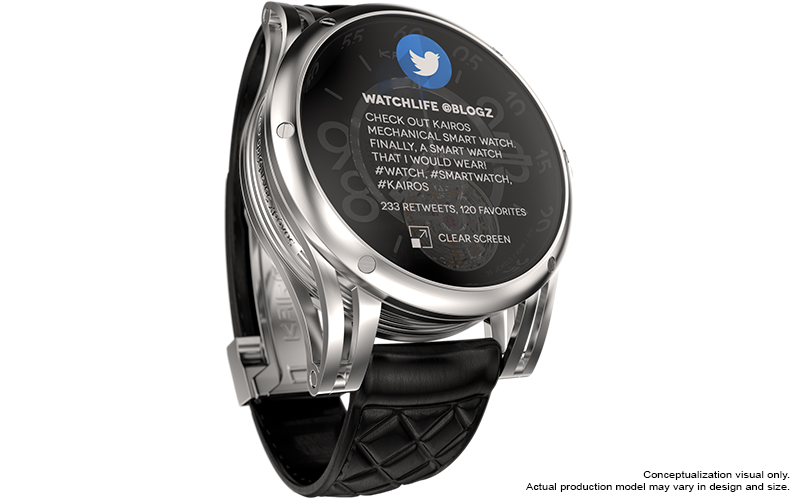 The image above might look like yet another gaudy iWatch concept, but it’s not. It’s called the Kairos, and it’s very real—well, it’s not in stores yet, but the company has begun taking pre-orders and hopes to begin shipping by December.

Billed as the world’s first mechanical-smartwatch hybrid, the Kairos is unlike anything we’ve ever seen in wearables. Featuring true, self-winding watch movements and a transparent OLED display, the watch blends both tech and fashion…

In terms of functionality, the Kairos is capable of most everything you’d want a smartwatch to do. It can show notifications for everything from incoming calls to Facebook messages, and can act as a fitness tracker, remote control and more.

The company is touting battery life of between 5-7 days and mechanical movement life of 42 hours. It doesn’t specifically say what devices it will support, but one could assume it will work with both Android and [iOS 7+] iOS smartphones.

It’s also worth noting that Kairos says the above images are for ‘visualization purposes only,’ meaning the final product could look way different. And you get a sense that delivering a working version of this watch will be easier said than done.

Should it make it into production, though, retail prices for the Kairos will range between $1,200 and $2,200, depending on the model. Folks who pre-order within the next month will get a big discount, taking the entry-level model down to $500.

Of course, that’s a tough decision considering that the watch won’t begin shipping until December. A lot can happen between now and then, especially with Apple expected to introduce its long-rumored ‘iWatch‘ smartwatch sometime this fall.

So, what are your first thoughts on the Kairos?