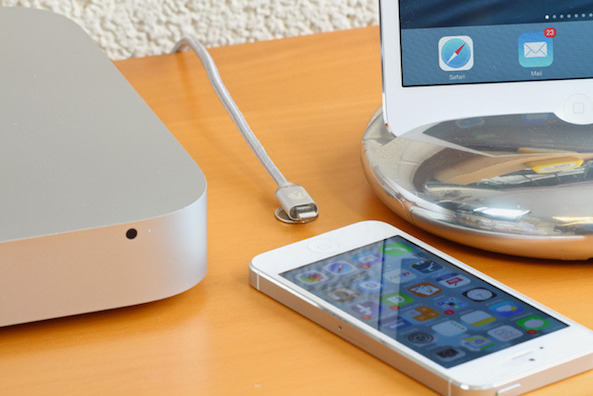 I recently went on a road trip to Montréal, only realizing upon arrival that I had forgotten my official Lightning cable back home. With my iPhone running out of battery and no Apple Store within a short distance, I reluctantly purchased a third-party knockoff cable from a local electronics shop. In hindsight, it was a terrible decision. The cable barely worked and my iPhone constantly prompted me with compatibility warnings. It was a waste of both $20 and my time.

For that reason, I am enthusiastic about a new Kickstarter campaign for an upcoming product called the Quickdraw Cable by Woodford Design. It is hard to get excited over a simple cable accessory, but the Quickdraw has several advantages over a traditional Lightning connector and most third-party knockoffs. For starters, the one-meter cable is crafted with anodized aluminum plugs that are high quality and sturdy. That includes both strong cable strain relief and a waterproof design… 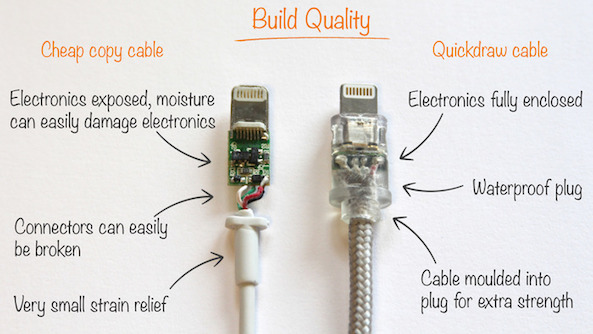 The team discusses how it achieved a design that is aesthetically and functionally sound:

We started working with numerous cable manufacturers to identify a far tougher and better quality cable design. We found the key to this was to have a moulded plug incorporating all the Lightning connector electronics and cable flex. This resulted in a very tough plug which we have extensively tested.

We also wanted a cable that looked great, so we looked at the best accessories on the market for the iPhone and iPad and took design clues from them. Look, feel and function were all key to creating a product that was just right in the hands of the customer and ultimately one that we would be proud of.

Quickdraw has a woven cable to ensure that it remains tangle free, and a magnetic tidy that attaches to an included magnet to prevent the cable from falling behind a desk, dresser or other workspace. The cable tidy also allows for easy access at home, work, in the car or elsewhere. An obvious downside here would be losing the tiny magnet, but the cable also sticks to any steel surface. The cable is topped off with laser-etched mirror graphics showing the Woodford Design logo. 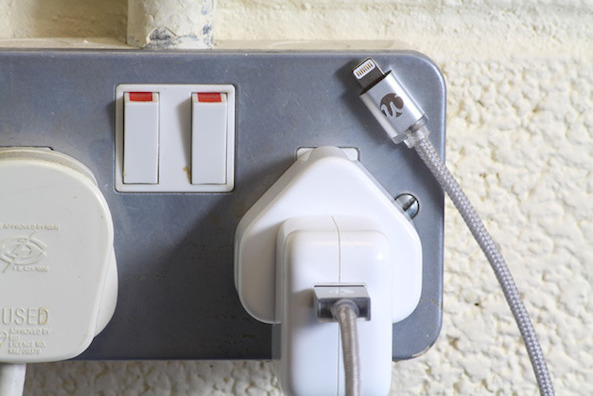 The product has successfully reached its £10,000 ($16,900) funding goal  just five days into its Kickstarter campaign, with the early bird price of £10 ($15) already sold out. Those interested can still make a minimum pledge of £15 ($25) to receive one Quickdraw Cable with free worldwide shipping and a lifetime guarantee. Woodford Design is unsure how long the manufacturing process will take, however, so expect delays in the weeks before the finished product arrives at your doorstep.

Quickdraw is compatible with all iPhone, iPad and iPod touch models that are equipped with an 8-pin Lightning connector. If the campaign reaches at least £15,000 ($25,400) in funding, the creators will produce the cable in gold and space grey versions. At the £40,000 ($67,600) funding level, the company will look into adding an LED indicator that lights up red or green depending on the charging status of your device. The feature will depend on approval from Apple.

Overall, this is an interesting third-party accessory that merits the attention and funding it has been receiving. I will hold off on deciding to purchase the Quickdraw until it comes off the assembly line, and has a final price tag, but the cable definitely appears to be a solid and well-researched product. More information about Woodford Design and the Quickdraw Cable is available on the official Kickstarter campaign page and this Reddit Q&A thread.

Have you looked at our other cable coverage?