As Apple continues to move anything it can away from Samsung as a result of heightened competition, fierce rivalry and an ugly patent spat between the two technology giants, Samsung seems to be doing the opposite, hoping to to please Apple’s enormous appetite for mobile processors powering iOS devices.

More than a thousand in-house Apple engineers design chips like the A7 processor and the M7 motion coprocessor. The former, the mobile industry’s first 64-bit processor, serves as the engine that drives the latest crop of iOS devices like the iPad Air, the iPad mini with Retina display and the iPhone 5s.

To manufacture these things in volume according to its blueprints, Apple relies on some of the biggest of the chip-making services known as foundries because it doesn’t have or operate its own semiconductor plant, an investment upward of $10 billion.

Samsung semiconductor arm has thus far churned out all Apple-designed mobile chips. Moreover, the company remains adamant to do so in the future despite its straining relationship with Apple and persistent talk of the iPhone maker throwing itself into the arms of Taiwan Semiconductor Manufacturing Company (TSMC), the world’s largest independent semiconductor foundry.

Samsung and GlobalFoundries, the Santa Clara, California headquartered chip foundry, yesterday signed a global partnership to standardize mobile chip production around the same 14nm FinFET process technology. The deal gives Apple the flexibility to build its A-series processors at both foundries, which was previously impossible due to the foundries’ incompatible production processes…

As The Wall Street Journal explains, the global agreement means that chips produced by Samsung and GlobalFoundries will be essentially identical. As a result, their clients that design their own chips, like Apple, could have their products built in factories operated by either company “with no extra effort.”

The collaboration leverages volume production at Samsung’s fabs in Hwaseong, Korea and Austin, Texas, as well as GlobalFoundries’ fab in Saratoga, New York. The partnership will ensure “consistent production, enabling customer designs to be produced at multiple sources with no redesign required.”

The new pact with Globalfoundries, in theory, could allow Apple in the future to also shift chip orders between Samsung’s Austin plant and a Globalfoundries factory near Albany, N.Y.

More importantly, the collaboration between Samsung and GlobalFoundries allows Apple to reduce its exposure to Samsung as a single supplier for mobile chips. 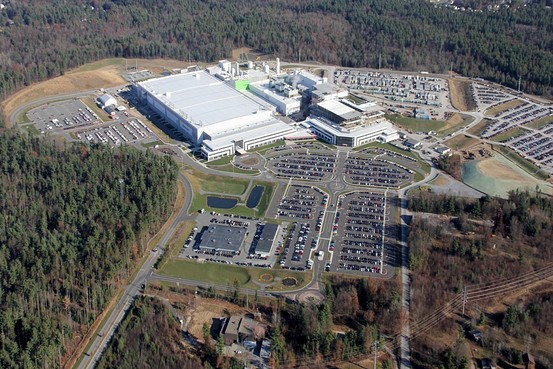 A report last November claimed Samsung had sub-contracted GlobalFoundries to build chips for Apple at a new $6 billion facility in upstate New York.

Samsung will seemingly use GlobalFoundries for flex capacity, an industry practice under which a chip manufacturer pays to occasionally use another company’s factories when demand on their own factory is running higher than they would like. 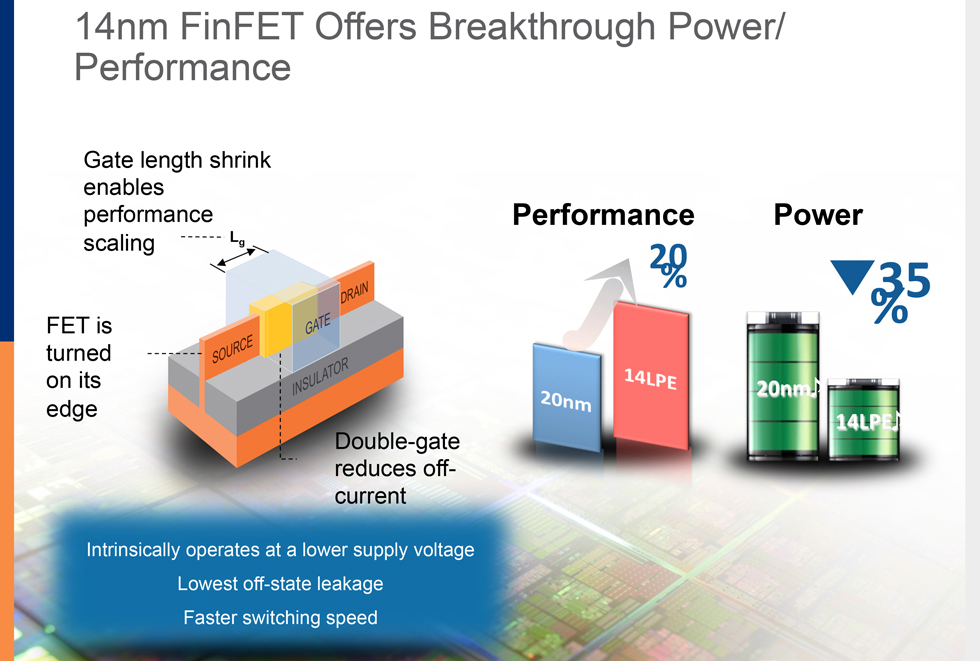 According to a media release, first Samsung-manufactured 14nm chips are expected to ship in volume in late-2014. However, as GlobalFoundries needs more time to adopt Samsung’s process tech, its own 14nm FinFET chips are expected in early-2015. 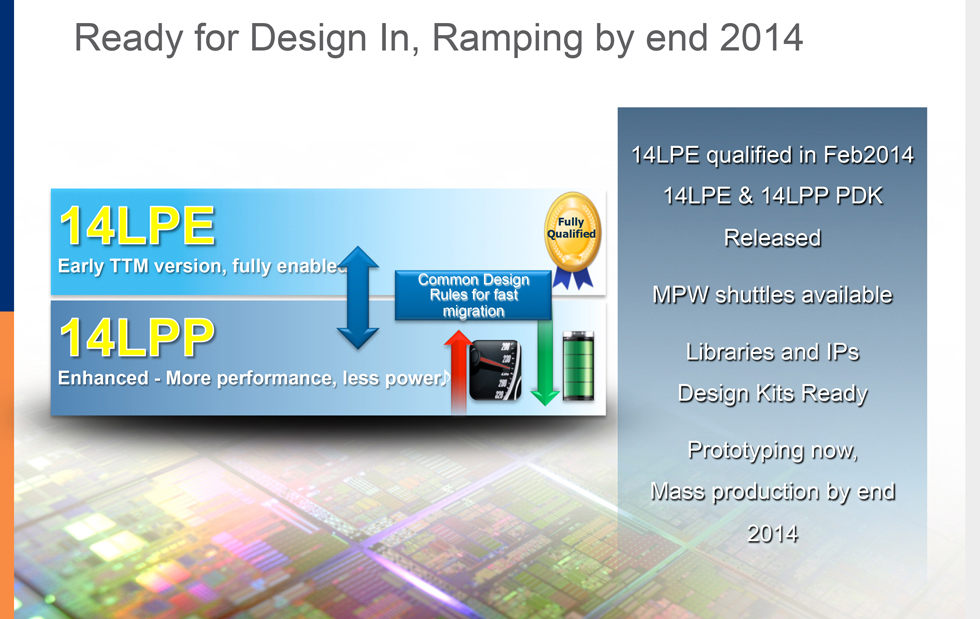 More in the promo video below.

A video Samsung and GlobalFoundries put together to explain what the deal means for the industry is available on Vimeo (can’t embed due to privacy settings).

Make no mistake about it: this deal is also aimed at TSMC, the world’s top chip foundry.

The Wall Street Journal reported last June that Apple had cut a chip-making deal with TSMC. To this date, TSMC-made chips haven’t begun appearing in Apple products yet.

Coincidentally or not, a TSMC exec yesterday hinted his company could produce the upcoming A8 mobile processors for Apple. The firm is said to be one of the suppliers for the A8 chip tipped for the iPhone 6 this Fall.