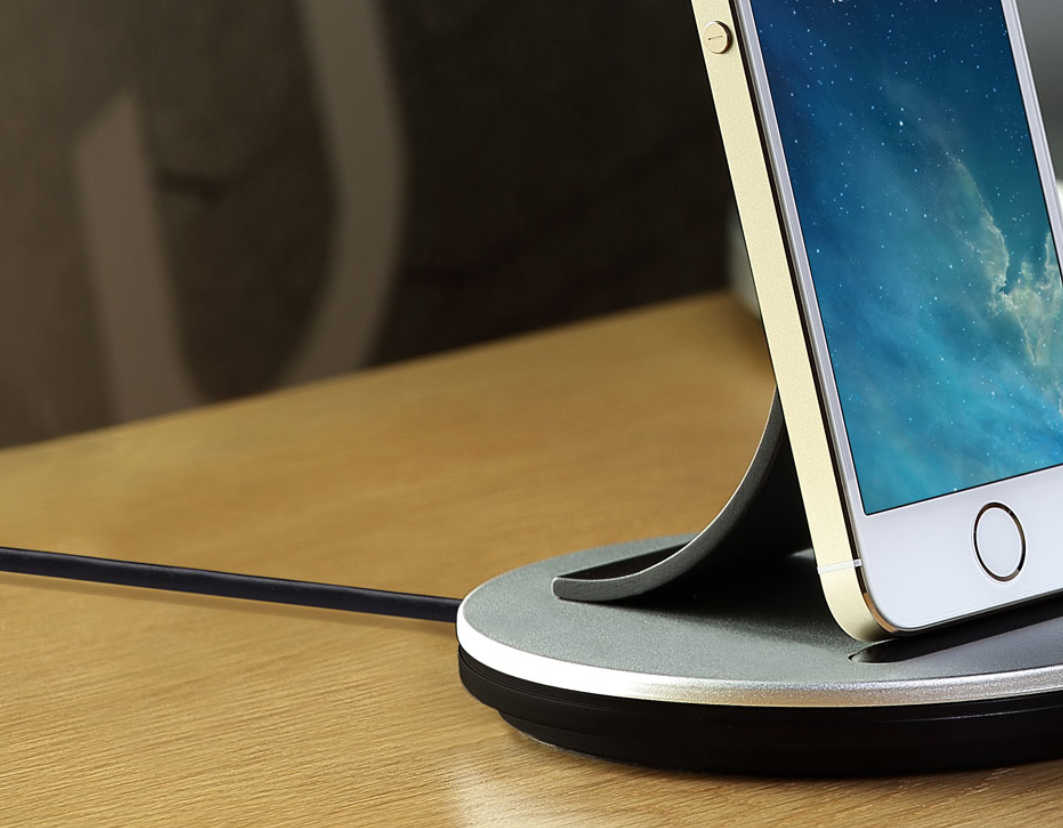 Docks are my favorite iPhone and iPad accessory. I am not exactly sure what about them is enticing, but having my iOS devices propped elegantly at my workstation has been alluring since I first purchased an iPhone. Apple’s products are not just devices for productivity. Apple’s products are works of carefully crafted art.

In that nature, I would rather prop them up as a showcase. You wouldn’t buy a $600 piece of art and let it lay aimlessly around your home. You would place it prominently, making sure others can tell you have great taste. You own an iPhone, right? Apply the same concept…

The AluBolt is an upright docking stand for iPhone and iPad mini. I did throw my iPad Air on there for a test run, agreeing with Just Mobile’s primary intentions to use only the mini. iPad Air was a little wobbly on the stand because of the larger form factor. AluBolt’s base is 10.3mm (4.05″) in diameter with a brushed aluminum top plate, which houses the curved upright arm and Lightning port.

Below the aluminum plate is a black plastic base with a scratch resistant pad to protect desktops from unnecessary scratching. The bottom pad is not a micro-suction pad, however. Without an attachment point or adhesive, combined with a very light form factor, removing iPhone or iPad mini requires two hands.

There are mixed opinions about whether a dock should require two hands for removal, but I pref to grab my device and go. Using two hands to remove my device is a time waster and often annoying. The nature of stands with chargers, however, is one that has some pull requirements. The Lightning connector, in contrast to the 30 pin, seems to stay connected more intently, requiring a stronger pull to separate the device and cable. As such, any dock with a built in Lightning port will require a harder tug for removal. Consequently, unless the dock is extremely heavy, about 3lbs, or uses an adhesive like 3M or micro-suction, it will require a two handed motion to spring the iOS device. 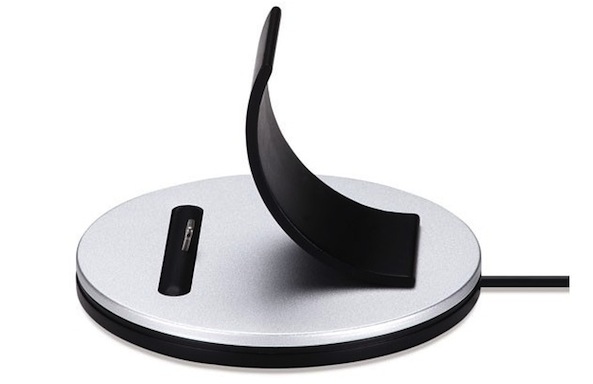 As pictured, the black plastic housing for the Lightning pin allows movement fore and back. More dock makers seem to make this added detail a priority, which should have been included many years ago. Allowing the Lightning tip to move provides a safer connection. Most people, myself included, quickly grab their device and go, without thinking about damaging iPhone’s Lightning port. The pivoting head prevents damage both to the tip and the Lightning port located on the iOS device. Docking either the iPhone or iPad mini does not require the tip to be moved, however.

I like the unit includes a built-in USB cable. Others may take a short cut and leave out the cable, requiring a user installed job. With the included cable, I am not forced to use an Apple OEM cable, which are still in short supply around my home, car, and office.

With an upright design, the curved plastic adds an interesting flair to the overall design, matching the circular base. I would prefer an aluminum support bar, but aluminum on the back of either iPhone 5s or c, could cause scratching without a barrier. Unfortunately, there is no way to adjust, bend, or move the support bar, eliminating the user’s ability to modify the viewing angle. 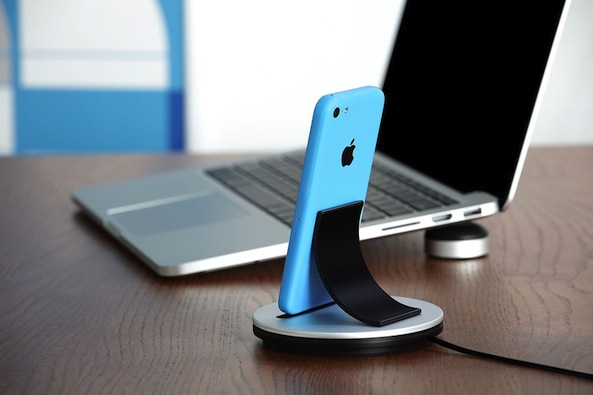 As I mentioned, I am a pretty big fan of docks in general, making me predetermined to enjoy the AluBolt. Admittedly, I do like the AluBolt overall, but there are areas of improvement. Most notably, I really hate having to use two hands to remove my iOS device. This is picky and a personal preference, but that is a big sticking point for me. The plastic arm is also a little aggravating, including its inability to pivot, which is, again, a personal preference.

The aluminum base matches my iMac completely and the pivoting Lightning tip is an excellent damage preventer. Including the installed Lightning cable is also a big plus. As I use a wooden desk, the scratch preventing pad is appreciated, but is an opportunity cost to forego a micro-suction option.

AluBolt is available for $49.95, which is consistent with other certified MFi accessories, especially with included Lightning cables. I would be happy to pay a few extra dollars for a full aluminum design.

Who else loves docks?