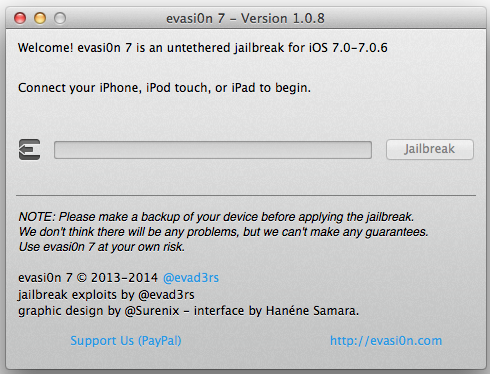 At some point during the past week or so, the evad3rs released an update for evasi0n7, bringing the jailbreak tool to version 1.0.8. According to the change log, the software now supports build 11A466 of iOS 7.

Apparently 11A466 is a factory build—not available for download—of the iOS 7 firmware that shipped on some of iPhone 5s and 5c units. And up until now, folks with these devices were having issues jailbreaking…

“I got my jailbroken iPhone 5s exchanged due to water damage and when I got my new iPhone 5s it came with the IOS 7.0 build (11A66) so I tried to jailbreak it and Evasion “this ios version is not supported” I tried with with vers 1.0.7 and 1.0.0. Whats going on? Was that build never supported? I can’t update because of the new IOS 7.1.”

It looks like some folks were having success jailbreaking via a workaround that involved hex-editing evasi0n7’s executable file, but obviously this update removes the need for all that work. Now you can just click a button.

So if you happen to come across an iPhone with iOS 7.0 11A466 on it, make sure to use evasi0n7 1.0.8 to jailbreak it. As always, you can find it on our Downloads Page, and of course we have tutorials for those needing help.

As for iOS 7.1, there is no public jailbreak available, and there’s no word on when/if that will happen.