AT&T, the nation’s #2 wireless carrier, said yesterday that its customers can take advantage of cheaper single-line data plans. Starting today, two gigabytes of high-speed 4G data will set you back $65 per month, which represents a $15 savings compared to the cost of the previous plan. The plan includes fifty gigabytes of cloud storage as well as unlimited international messaging and calling.

An additional line can be added for $25 per month. A month ago, the carrier slashed the prices of its Mobile Share family plans…

As a nice bonus, the new plans can be combined with AT&T’s existing promotion offering a $100 bill credit to new and existing customers who add a new line of service through March 31, 2014. 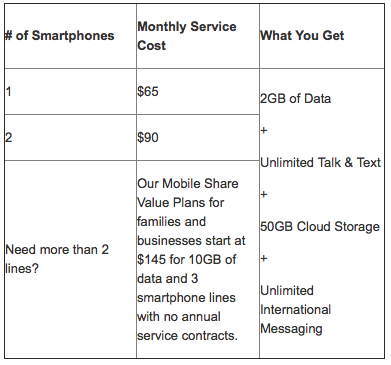 AT&T also reminded us that it recently added unlimited international messaging (includes text, picture and video) to all Mobile Share Value plans for no additional cost.

The offer includes messages sent from the United States, Puerto Rico and the U.S. Virgin Islands to more than 190 countries for text messages and 120 countries for picture and video messages.

Also, the firm has just rolled out its new LTE Advanced network in Chicago.

Three times faster LTE Advanced is also in the cards for T-Mobile.