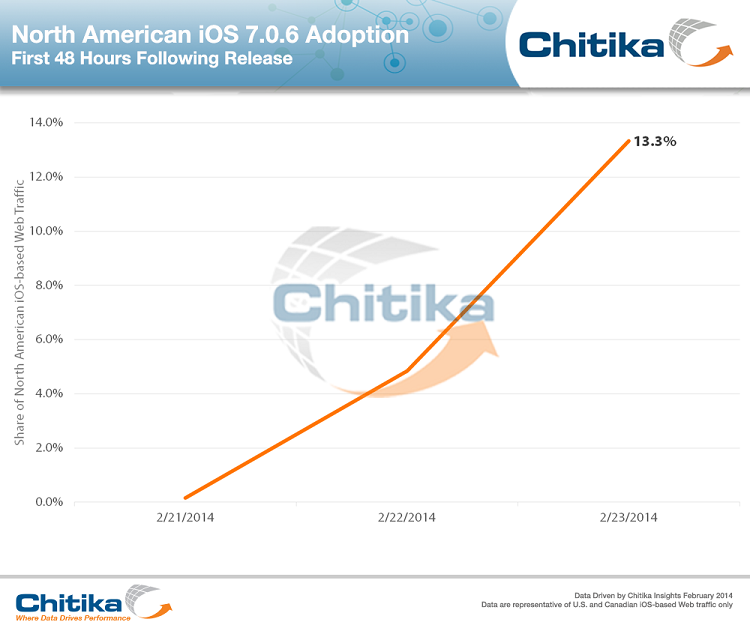 Now that Apple has fixed that nasty SSL bug across iOS devices, Macs and the Apple TV, the question arises as to how many active iPhone, iPod touch and iPad users are safe by running the latest iOS 7.0.6 software, which patches the dangerous vulnerability.

According to a new survey by Chitika, in 48 hours about 13.3 percent of North American users were on iOS 7.0.6. “More than two full days since Apple pushed the fix live, 13.3 percent of iOS traffic is driven by the latest update,” the firm wrote.

Apple traditionally sees the strongest firmware adoption of any mobile platform because software updates are not dependent on carriers’ good will and on-device alerts prompt users when a software update goes live, so the adoption rate should increase exponentially in the coming days and weeks…

Chitika explains that it derived the figure by examining “tens of millions” of U.S. and Canadian iOS-based online ad impressions generated within the Chitika Ad Network from February 21 through February 23, 2014.

Chart top of post clearly shows North American iOS 7.0.6 adoption rate rising significantly on February 23, 2014, two days into the software’s release. “Steep rate of adoption is a promising sign that a majority of iOS users could be running the updated OS within the next week,” noted Chitika. 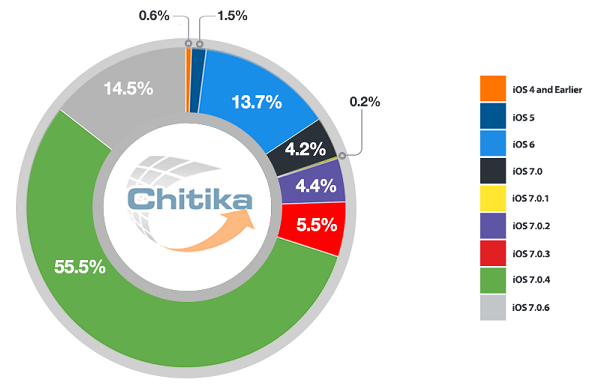 For the individual iPhone and iPad iOS version distribution snapshots, iOS-based impressions catalogued from February 23 were analyzed as well, the firm added. 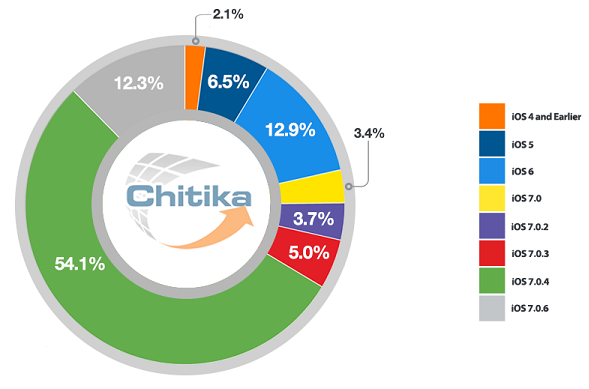 Breaking the issue down by device, iOS 7.0.6 users generate 14.5 percent of total North American iOS-based web traffic, with the majority of usage coming from iOS 7.0.4-equipped devices. In terms of major OS versions, more than 84 percent of iPhone web traffic within the U.S. and Canada is driven by iOS 7 users.

If you haven’t yet updated your iPhone, iPad and iPod touch devices to the latest firmware, you’re wholeheartedly recommended to do so immediately. The SSL bug allows attackers to steal your usernames, passwords, iCloud data, Calendar entries and other information, by posing as a legitimate website.

The bug manifests itself in Safari so using a third-party browser could offer a protection from these kinds of man-in-the-middle attacks. People who are jailbroken and want to keep their current firmware can patch the SSL bug without upgrading to iOS 7.0.6, by following Jeff’s handy guide.

And if you own an Apple TV, update your set-top box to the latest Apple TV 6.0.2 software to get rid of the SSL vulnerability.