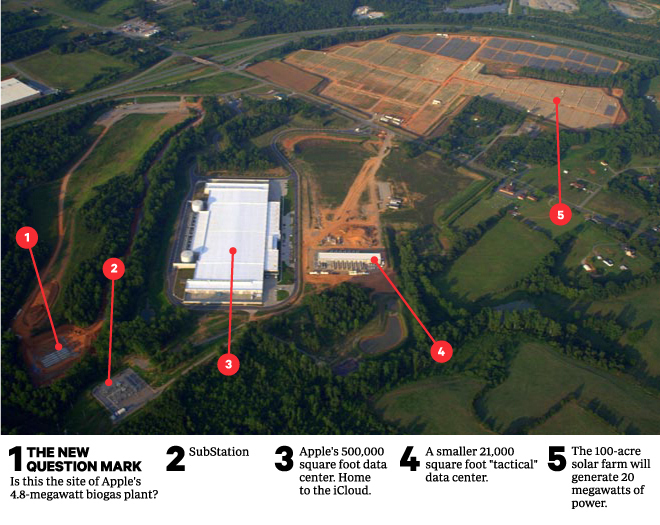 According to permits filed with Catawba County, Apple is once again expanding its data center facilities in Maiden North Carolina. The plans say the new data center building will cover 14,246 square feet with walls 25 feet tall, made of concrete panels and steel columns.

The building will look very similar to the ‘tactical’ data center that Apple added to the site in 2012, and have a similar layout with banks of computers in the main portion of it and 11 air units to cool it. It will also feature various security measures, including a ‘man-trap’ door…

Here’s the report from The Hickory Daily Record (via MacRumors):

“An erosion permit for a new data center at the tech giant’s Maiden data center was filed Wednesday with Catawba County. Plans filed with the county for the data center say it will be 14,246 square feet and 25 feet tall. It will be made of precast concrete wall panels along steel columns.

The plans call for an office, business area, breakroom with one unisex toilet and storage area.Like the previous tactical data center, plans for the new one shows banks of computers in the main portion of it and 11 air units to cool it. Two more air units will supply the office and other occupied area of the data center.

Its security measures appear to be similar to that of the previous data center, including what’s called a man-trap door — one door closes before the second one opens.”

The previous tactical data center, which was built in 2012, is 21,030 square feet and sits to the side and rear of the main data center. Apple spent $1.8 million on its construction. There’s no word yet though on how much the company will spend on this new adjacent building.

Altogether, Apple’s data center site in Maiden is huge, featuring over 500,000 square feet of buildings and a 100-acre solar farm. The iPad-maker uses the center to facilitate its iCloud and iTunes services, and many believe it could be used for a future streaming video service.