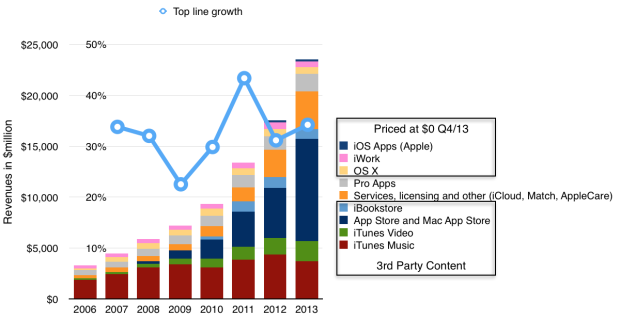 If Apple’s iTunes were a separate company, it would rank 130th on Fortune’s annual list of the Top 500 companies in the United States. It’s also half the size of Google’s search business! The high-volume, low-margin store raked in an astounding $4.4 billion in revenue during Apple’s fiscal 2014 first quarter ended December 28, 2013.

And according to independent analyst Horace Dediu of Asymco, total iTunes revenue in 2013 topped – wait for it – an incredible $23.5 billion. That’s an awful lot of money for an online-only content store…

Dediu says the iTunes, Software and Services category saw a 34 percent annual boost thanks to the increases in revenue from app sales, AppleCare and licensing.

The $23.5 billion in 2013 revenue puts iTunes between Alcoa and Eli Lilly in the latest Fortune 500 rankings. “On a yearly basis iTunes/Software/Services is nearly half of Google’s core business and growing slightly faster,” he wrote.

For the year 2013, revenue from apps rose 105 percent, video was up nineteen percent, pro apps climbed 29 percent and services were up 37 percent.

OS X as well as iWork and iLife suites saw a net loss in 2013 because Apple started offering these items for free.

During the last quarter Apple changed the pricing for iWork and OS X to zero. I estimate the net effect to have been a reduction in revenues from those software titles of about $350 million for the quarter.

It’s interesting that music sales on the iTunes Store also declined in 2013. 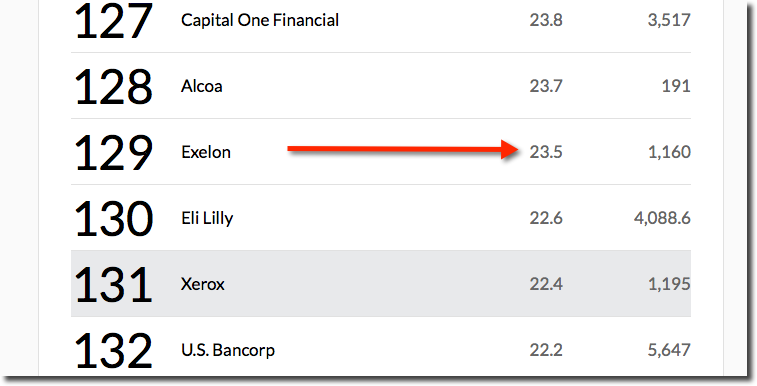 Note that the $23.5 billion figure is gross revenue for iTunes, Software and Services. As you know, Apple keeps only 30 percent of proceeds on sales of apps, movies, music, books and other digital content.

The article sheds more light on the 34 percent annual growth in the iTunes Store:

Growth in the iTunes Store, which includes the App Store, the Mac App Store and the iBooks Store, was driven by increases in revenue from App sales reflecting continued growth in the installed base of iOS devices and the expansion in the number of third-party iOS Apps available.

Again, Apple folds sales software, accessories and iTunes content into the iTunes, Software and Services category. Keep in mind that the iTunes Store is a high-volume, low-margin business because Apple only keeps 30 percent of proceeds to itself.

The company used to say that the 30 percent cut was needed to cover the costs associated with billing, bandwidth, content hosting, marketing, engineering and so forth.

But the days when iTunes Store used to barely brake even are obviously long gone as the company’s digital stores have become a profitable business.

You know what I find really shocking?

That the iPod, which saw a whopping 52 percent annual decline in units sold, made far less revenue in the last quarter than the iTunes, Software and Services category – “only” 973 million versus $4.4 billion for the latter.

In other amazing stats: the iPad earns more than McDonalds on Fortune 500 and the iPhone is bigger than Microsoft, Coca Cola, Nike and many more.