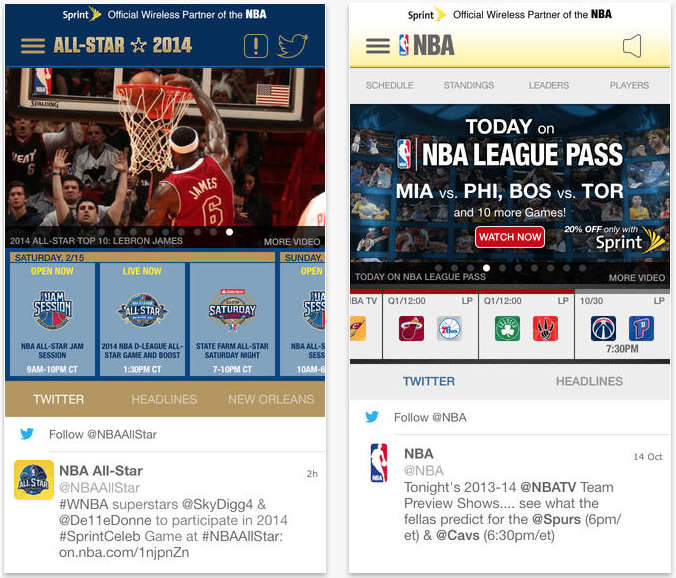 Now that the Super Bowl is over, and pro football is no more, the attention of many sports fans will now turn to basketball. College teams are just a month or so away from the big March Madness tournament, and the NBA is just two weeks away from All-Star weekend.

And because of that, the NBA pushed out a big update for its Game Time app this weekend. The update brings the app to version 5.2, and adds several new All-Star data points and features including rosters, schedules and everything you need to keep up with the action…

Full Support for the 2014 NBA All-Star Weekend including:
– All-Star Dashboard – Full event Schedule for the Weekend, Featured Videos from the weekend, Live Press Conference streams, live video from the weekend, social feeds, and headlines.
– Event sections – There is an event section for each of the events of All Star Weekend, including event information, ticket links, venue maps, directions, video, live scoring, and social feeds from the events of the weekend. These include Jam Session, The Celebrity Game, The BBVA Rising Stars Challenge, The D-League All Star Game, State Farm All-Star Saturday Night Events, The Sprint Pregame Concert, and the 63rd NBA All-Star Game.
– Voting from all of the applicable events from All-Star Weekend.
– New Orleans Location Information for people attending, including Maps integration for Venues, Parking and Retail locations.
– All-Star Video Channels with behind the scenes video from All-Star Scene and professionally produced highlights from the events.
– All-Star Push Notifications – The addition of opt in Push Notifications channel to get notified about everything All-Star.
In Addition to this support of All-Star Weekend, this release contains:
– Condensed Games – Addition of, going back to the start of the season, a condensed version of each game, which will be available for all games moving forward. These are available free for all Sprint users, and users who have purchased our Game Time Plus or League Pass. Blackout restrictions may apply.
– 72 Hour Blackout Expiration – All local market blackouts on League Pass archives and Condensed Games now expire after 72 hours.

Even if you’re not a huge NBA fan, a lot of the All-Star events are fun to watch. There’s the Celebrity Game, which features stars from all types of media, and then my favorite: the Sprite Slam Dunk contest. I also really like the Skills Challenge and the 3-Point Shootout.

Obviously, if none of this stuff interests you, then the app will be useless. But if you’re looking for a way to entertain yourself during the weekend of February 14-16, you might want to check this out. The NBA Game Time app for iOS is available in the App Store for free.