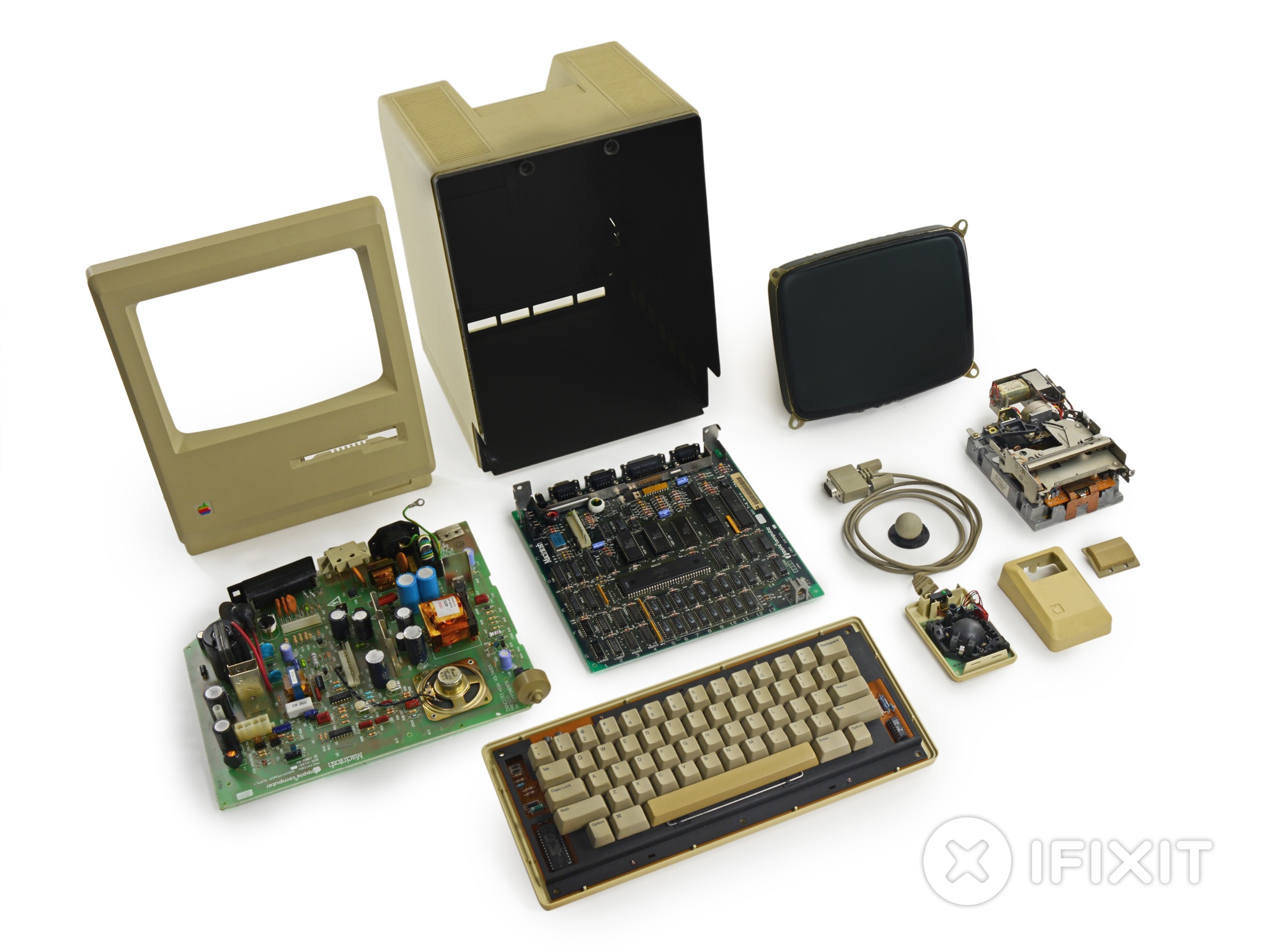 Repair wizards over at iFixit have decided to do something insanely great in honor of the 30th Macintosh anniversary – they tore apart the vintage 128K Macintosh, the original Mac system that jumpstarted the personal computer revolution.

Back then (in 1984), the Mac had an 8MHz (that’s megahertz, not gigahertz like today’s processors) 68000 CPU from Motorola and a nine-inch black and white CRT display sporting a very non-Retina resolution of 512-by-342 pixels, just thirteen percent more pixels than the original 2007 iPhone.

The operating system and applications purred along happily using just 128KB of DRAM. 1,024 kilobytes is one megabyte and to give you some context – 128KB is less RAM than the iDownloadBlog logo image.

Its then revolutionary Sony-made 3.5-inch floppy disk provided 400 kilobytes of total storage. Jump past the fold for a remarkable blast from the past…

The machine (Macintosh Model M0001) was loaned to iFixit by The Vintage Mac Museum (run by historian Adam Rosen), the team explained.

The roller-ball mouse (the Apple Mouse II, Model Number M0100 to be exact) was single button because Steve Jobs wanted to avoid user confusion. Both the keyboard and the mouse connected to the Mac through the bulky DE-9 plugs. 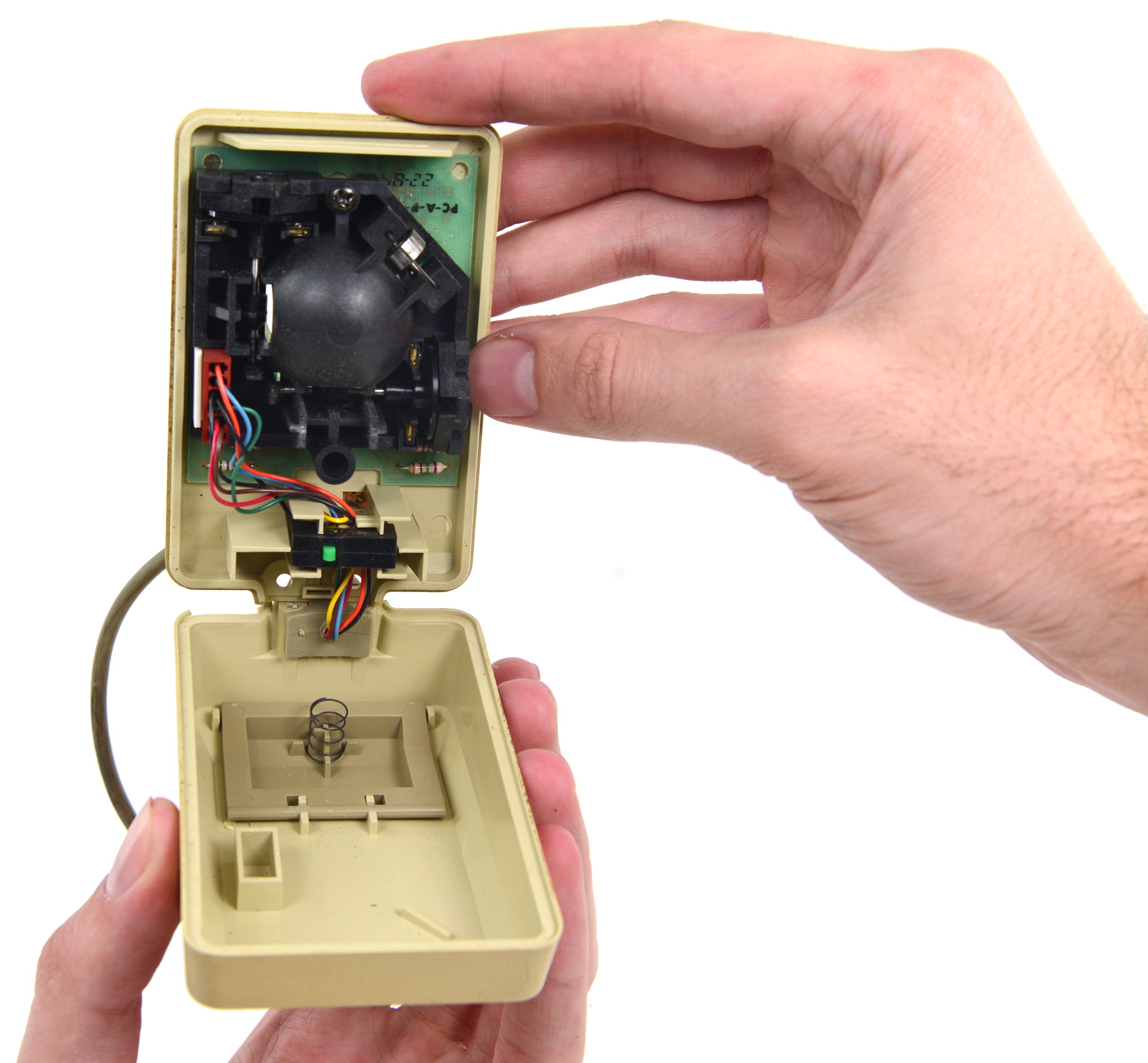 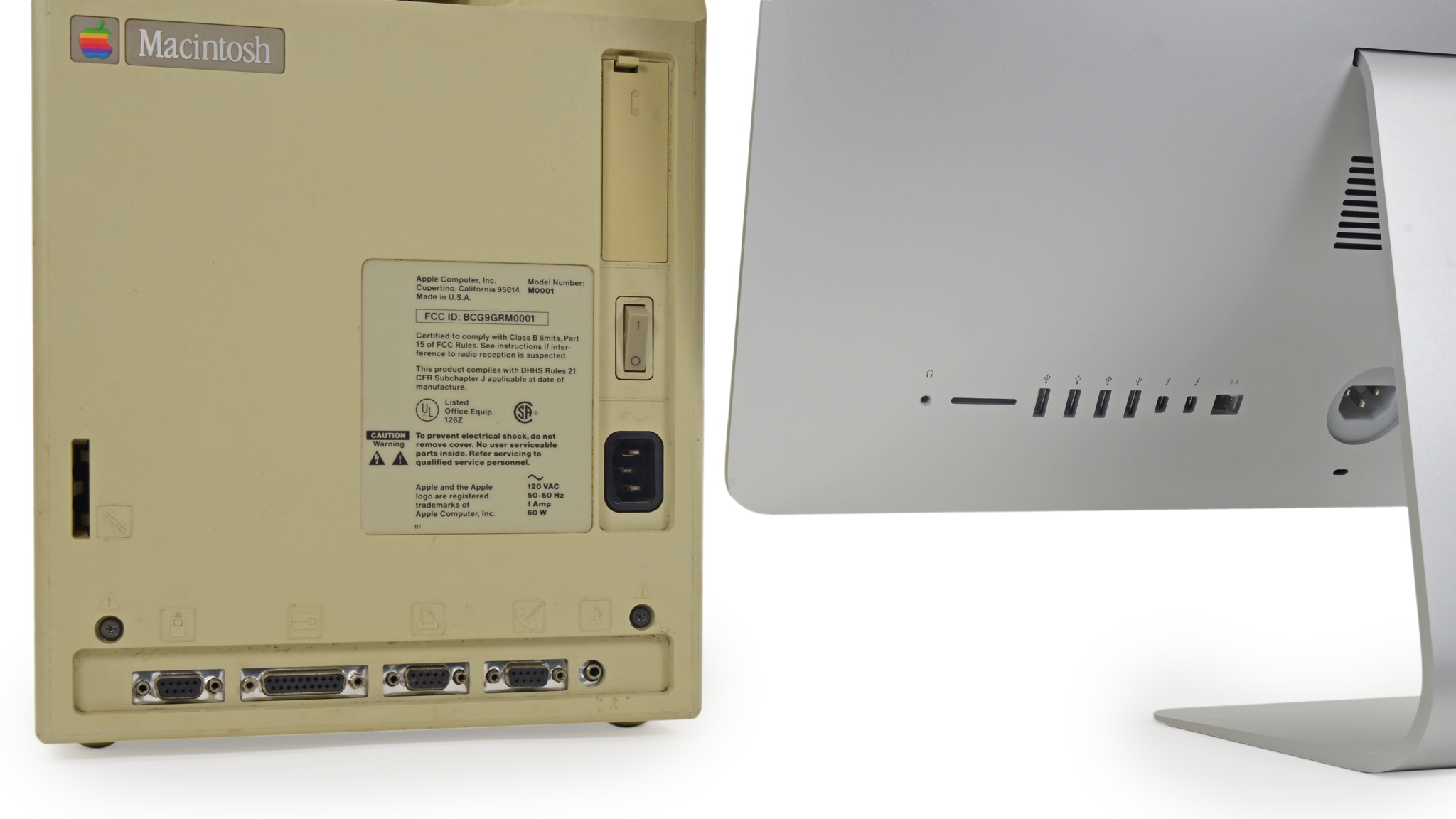 The AC plug is the same!

The then high-speed serial ports had speeds measured in thousands of bps, rather than billions as today’s Thunderbolt I/O. If you wanted to repair the power supply or get to the CRT, you risked the possibility of a high-voltage electric shock from the display.

Notice any difference between the keyboards? 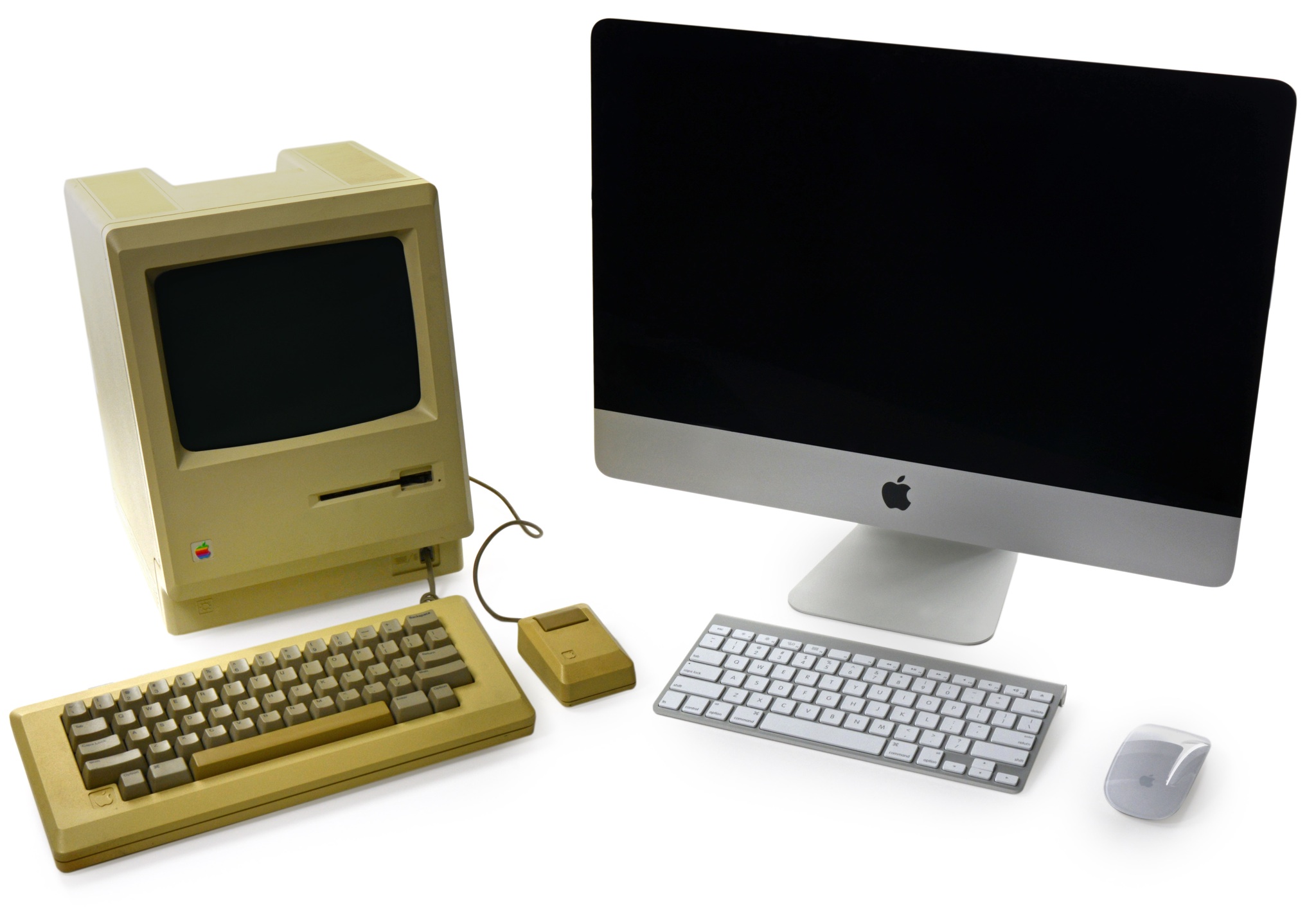 And we now have arrow keys! In typical Apple fashion, they ditched the arrows on the original Mac to force people to use the mouse, a strange new accessory at the time.

And here’s the teardown video.

Right from the beginning, the original Macintosh set an engineering example for all future Apple products to come. Back then, Apple didn’t use adhesive in the assembly process and there were no proprietary screws, though you needed the special allen wrench to remove the deep screws.

Apple also had a special prying clamp for cracking open the case.

All told, the original Macintosh was a lot easier to repair compared to contemporary Apple products, even though the RAM was soldered on the motherboard and the system wasn’t expandable internally at all. 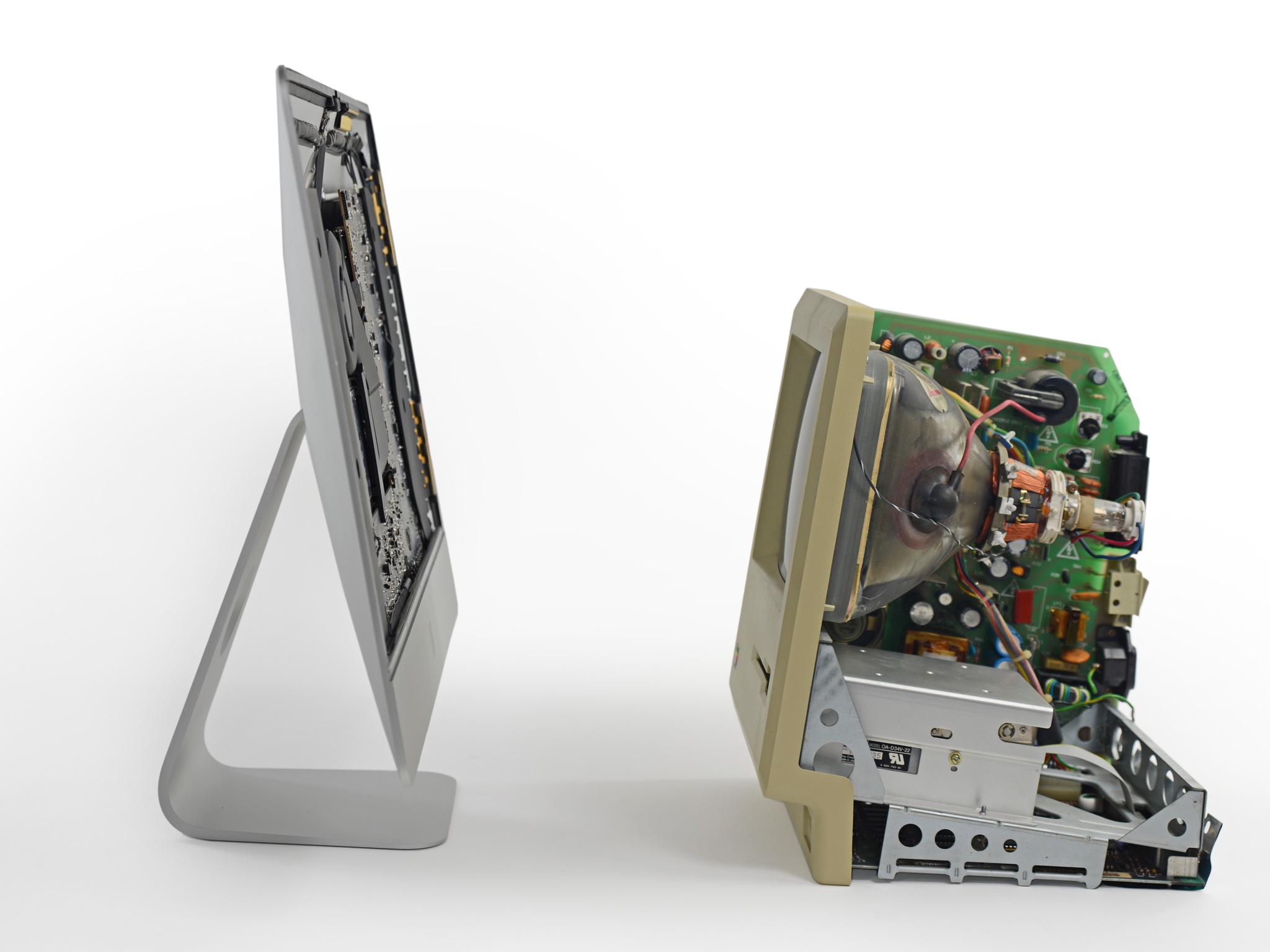 iFixit awarded the computer a repairability score of seven out of ten.

What’s that you say?

The original Mac is weird by today’s standards? Let me tell you, you haven’t really seen weird until you’ve seen the twentieth anniversary Macintosh (below). 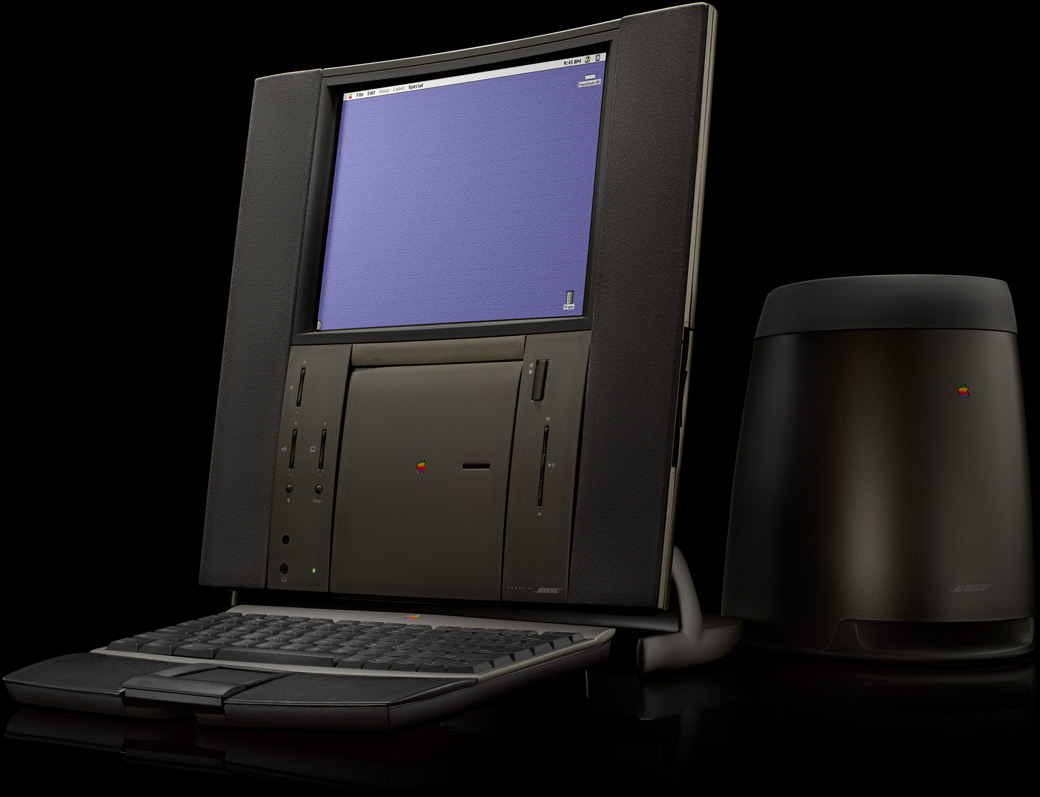 These are all investors cheering, not the easiest bunch to impress.