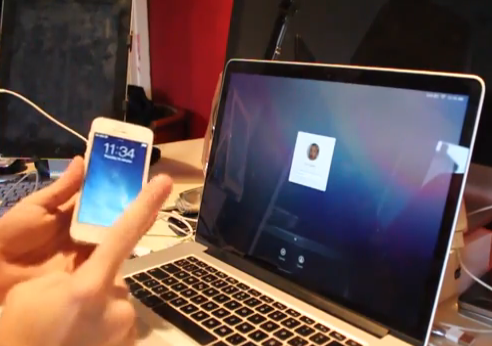 We’ve seen our fair share of Touch ID-related tweaks since the release of the evasi0n7 jailbreak a few weeks ago, and we keep being amazed at some of the ideas developers come up with.

French developer Eric Castro came up with yet another brilliant idea to take advantage of Touch ID, but this time, the tweak is not used to directly interact with your iPhone, but rather with your Mac…

As demonstrated in this video, Castro has developed a tweak called BioUnlock that lets you unlock your Mac using Touch ID. Somewhat similar to the Knock app we mentioned a few months ago, BioUnlock seems to work slightly differently for the time being.

Of course, this is still work in progress, and much still needs to be done, according to the developer. Castro hopes to be able to create a simple pairing tool and UI for the Mac and for the tweak itself. He also notes in a Reddit post that the tool will be Mac only at first, and Windows support will come later.

The informal ETA for this tweak is the end of January. We’ll make sure to go hands on (or maybe I should say fingers on) with BioUnlock once it is available in Cydia.

In the meantime, please tell us what you think about BioUnlock. Is that something you’d use?

Other Touch ID Tweaks you may want to check out:

Thanks Hugo for the tip!