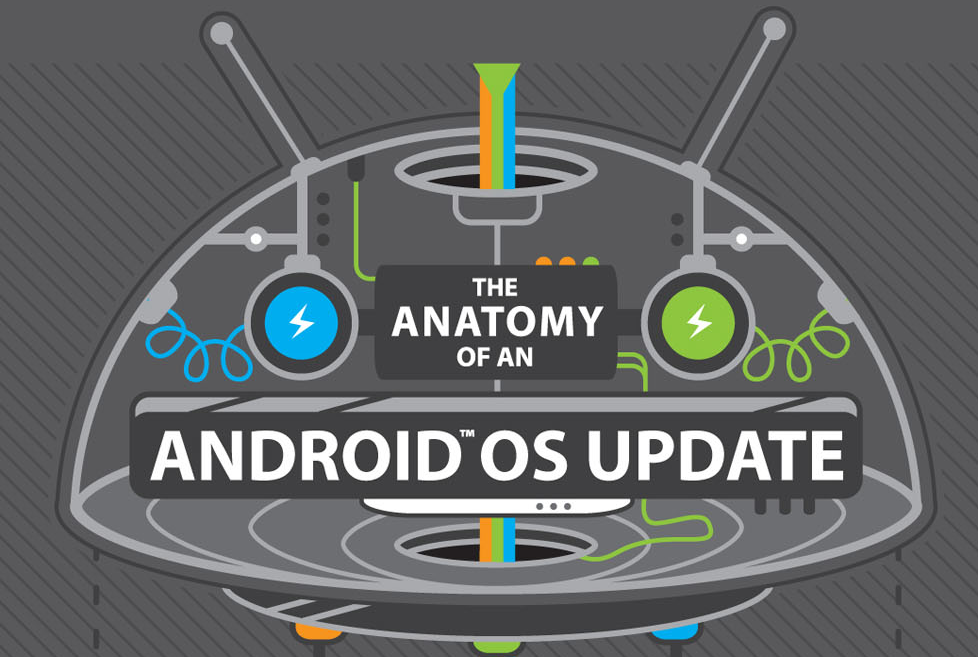 HTC, the struggling Taiwanese handset maker and one of the early Android backers, on Thursday released an interesting infographic which details the incredibly slow, painful and complex process of developing, testing, certifying and deploying Android OS firmware updates to devices in the wild.

According to Apple, 74 percent of devices had iOS 7 installed two and a half months following its release versus 1.1 percent of devices running Android 4.4 KitKat, as per Google’s developer dashboard. Compared to the ease of applying iOS updates, the Internet giant is unable to just launch a new Android OS software update by making it live on its servers.

Instead, the anatomy of an Android firmware update resembles a no-man’s land where carriers, handset vendors and chipset makers, each with its own vested interests, often stall or even block these updates as a way of nudging customers to upgrade their hardware instead.

Often times, Android OS updates for specific devices never arrive at all and would get lost in the complex approval and certification limbo involving at least four stakeholders agreeing in order for an Android update to make it to customer devices…

HTC shared this infographic in a post on its Software Update status page to justify and detail the complex twelve-step process of releasing an Android OS update. Here’s just a tiny segment to give you a feel of the complexities involved in updating HTC devices to a new version of Android OS. 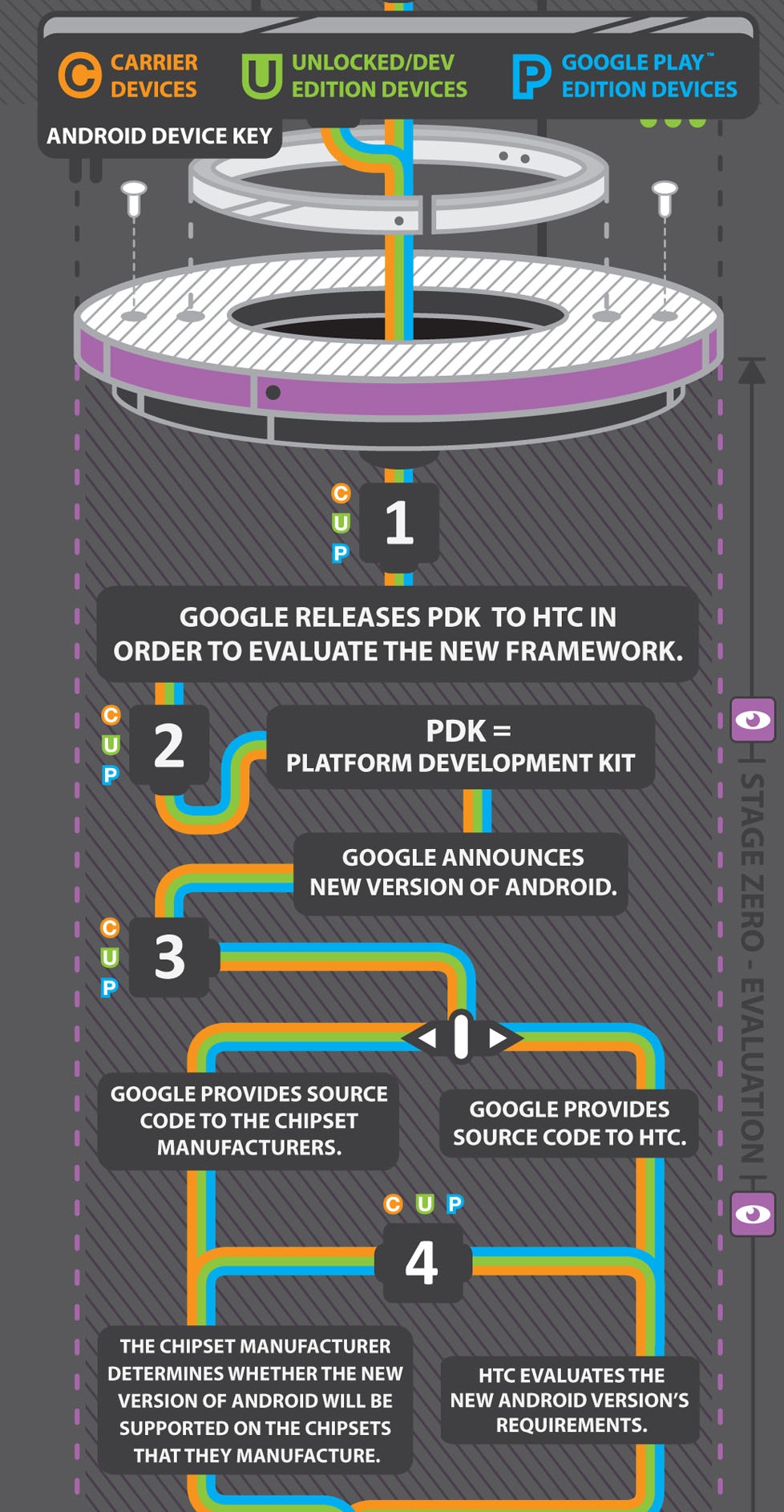 The whole process starts with Google releasing a so-called Platform Development Kit (PDK) with the tools for Android device makers. Android source code is not released to device makers until after an official announcement and Google swears that the rule applies to its own Motorola Mobility unit.

With dozens of Android handset vendors and chipset makers such as Qualcomm and Broadcom included in the evaluation process, approving a new Android OS version can take anywhere between weeks to months.

Every one of the companies involved can at any point pull their certification in case of a critical problem, or for any other reason. And if a chipset maker like Qualcomm certifies an Android OS firmware for newer chipsets only, devices in the wild powered by the company’s older chips won’t be able to run the new Android build.

That wouldn’t be much of a problem if customers were not left out in the cold more often than not, even though they were only halfway through with their contract.

The process gets more complex given Android devices are built and designed by three major parties: Google itself, handset makers and carriers. Yes, wireless carriers in the U.S. and elsewhere still exercise too much control by commissioning OEMs to build devices to their liking. 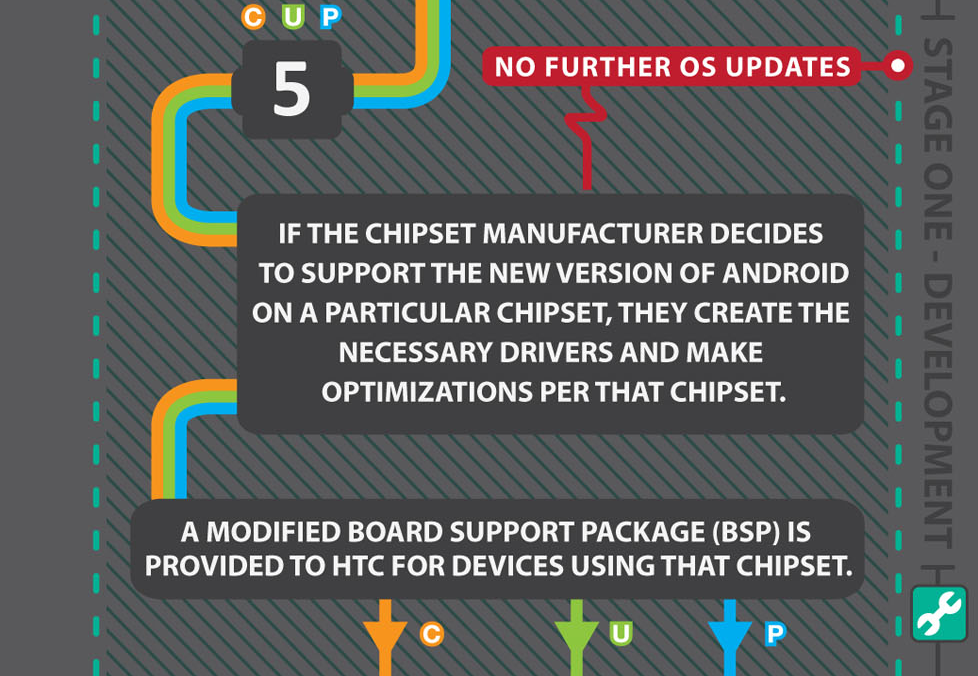 And then, finalized code must be certified, approved and agreed on by a bunch of world carriers, various regulatory bodies and – yes – Google itself.

As AppleInsider put it, “Any of these players can delay the update and force changes to be made, but Google maintains final approval – without Mountain View’s OK, the update will never see the light of day”.

Having so many parties involved increases the points of failure exponentially. As if that weren’t enough, the UI skins that Samsung, HTC and others put on top of Android – in order to differentiate from one another – further complicate and delay the testing process.

With Apple, you have a single company designing a device and its processor, writing OS and apps, sourcing parts, conceiving manufacturing processes and everything in between – all under one roof.

That’s not saying Apple’s process doesn’t involve hardware evaluation – it does, and some gadgets get left behind as major iOS updates typically won’t support outdated devices released three or four years ago.

And though iOS software updates do cater to owners of older devices, the experience of using the latest iOS build running on an old device often leaves a bad taste in the mouth – have you tried iOS 7 on an iPhone 4, for example?