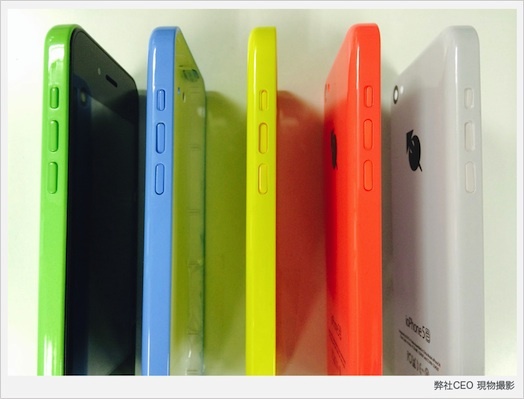 You’d be forgiven for mistaking the ioPhone for Apple’s iPhone 5c. This Android-based knock-off handset features the same plastic shell as Apple’s device and is available in the same five bright colors: yellow, red, green, blue and white. Made by Japanese manufacturer Iosys, ioPhone is almost an exact replica of Apple’s handset, down to the curvature, the physical buttons and other detail.

The handset will go on sale in Japan tomorrow and we have the weirdest promotional video ever for your viewing pleasure, right after the break…

The ioPhone runs Android 4.2 and packs in a rather pedestrian 254ppi 480-by-854 pixel resolution display and a two-megapixel camera. It’s powered by a dual-core Mediatek chip with 512MB of RAM and has 4GB of built-in flash storage, as reported by CNET.

By comparison, the iPhone 5c has a 640-by-1,136 pixel resolution Retina display, an eight-megapixel iSight camera, at least 16GB of onboard storage and runs Apple’s dual-core A6 chip with 1GB of RAM.

It’s probably made in China, anyway…