It looks like Honda is going to be one of the first auto-makers to ship a vehicle compatible with Apple’s new iOS in the Car feature. A representative for the company confirmed with a customer via Twitter that the tech will be available in its 2014 Civic.

For those unfamiliar with iOS in the Car, it’s essentially Apple’s next level of in-car device integration. Where ‘Eyes Free’ only let users access Siri, this will allow users to access apps like Phone, Maps, Music and more via their car’s built-in touchscreen… 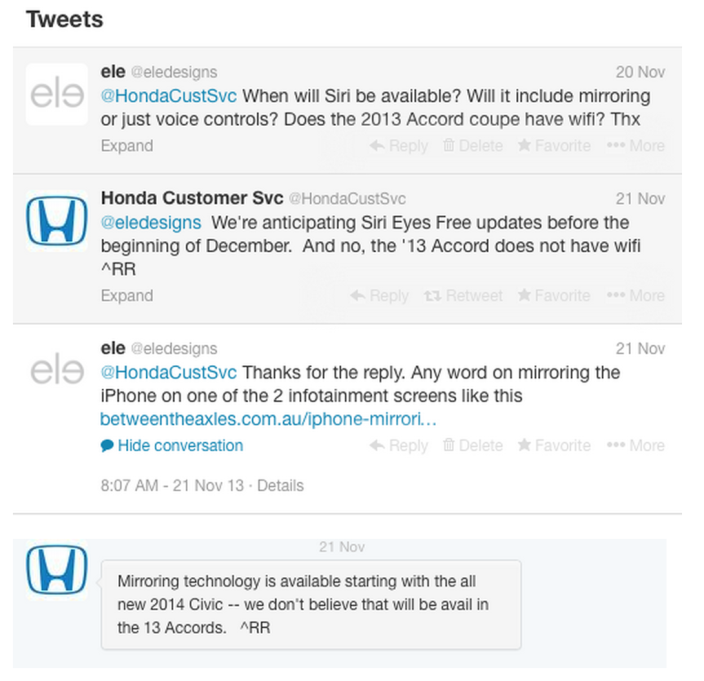 So what does this mean? Well judging from the rep’s comments, users will be able to control their iOS devices using the 7-inch multitouch display that Honda is building into the dash of its 2014 model Civic, which is expected to go on sale in early December.

Additionally, the rep told one customer that Honda would begin rolling out Siri Eyes Free updates for existing vehicles next month as well. So current Honda car owners (presumably only later models) can expect to see that functionality in the near future.

Though it may not seem like it now, iOS in the Car is a big deal for Apple. During a quarterly earnings conference call earlier this year, Tim Cook told investors it’s a “key focus” for the company and as important to its ecosystem as iTunes or the App Store.