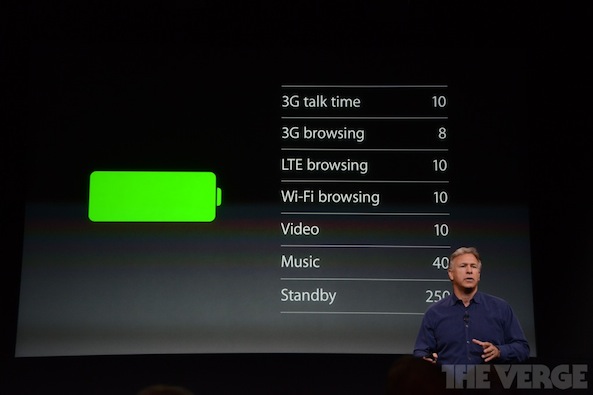 In a rare but not entirely unprecedented response, Apple’s gone on the record Tuesday with The New York Times (of all publications) to admit that a fairly limited number of iPhone 5s units may be plagued with lower than expected battery life and slow charging issues due to what the company attributed to an unspecified “manufacturing issue”.

This isn’t your typical teething problem fixable in software: Apple has said it will provide owners of the affected phones with a replacement unit. Here’s Apple’s full statement on the matter…

We recently discovered a manufacturing issue affecting a very limited number of iPhone 5S devices that could cause the battery to take longer to charge or result in reduced battery life. We are reaching out to customers with affected phones and will provide them with a replacement phone.

I choose to believe that NYT, not Teresa, is unaware that ‘5s’ is spelled out in lowercase.

The article educates us that “a manufacturing issue is not the same as a defective battery, which some users thought was the problem with their phones”. Apple could easily bill Foxconn for these defects and impose penalties.

The iPhone maker is no stranger to battery woes.

Back in 2006, they recalled some MacBook batteries because Sony-made cells tended to explode. Besides, we all remember the ugly iPod battery issues that used to dominate headlines a decade ago.

NYT thinks Apple’s statement “implied” that “a very limited number” means “a few thousand phones”. I would love to learn about the science behind that math!

Writer Brian Chen goes even further speculating how the iPhone 5S is supposed to have “significantly longer battery life” than its predecessors, without giving us the specifics.

Though Apple’s specs page rates both new phones as having the exact same battery life – ten hours of talk time on 3G, 250 hours standby time, 8 hours of Internet use on 3G (10 hours on LTE or Wi-Fi), 10 hours of video playback and 40 hours of audio playback – that’s not really the case.

Firstly, the iPhone 5s achieves its battery efficiency over the iPhone 5 by packing in a larger 1,570mAh vs the 1,440mAh battery.

Secondly, the FCC documents dug up by AnandTech revealed the iPhone 5s battery has a capacity of 5.96Whr, which is slightly better than the iPhone 5c’s 5.73Whr package.

The New York Times hit a new low earlier today after its writer Catherine Rampell made up a claim basically accusing Apple of being on a mission to purposely screw its customers by “busting your iPhone.”  The company, she wrote without producing any evidence whatsoever, “may be coordinating the obsolescence of its products”.

I swear I’m not making this up!

I was shocked and couldn’t believe this passes for high-quality journalism nowadays.

For a sensible take on NYT’s “piece,” read Brian Barrett’s takedown on Gizmodo.

Is your iPhone 5s acting up in terms of battery performance?

Mine’s working as advertised and I’m getting as much run time out of my unit as I did out of my iPhone 5, if not more.