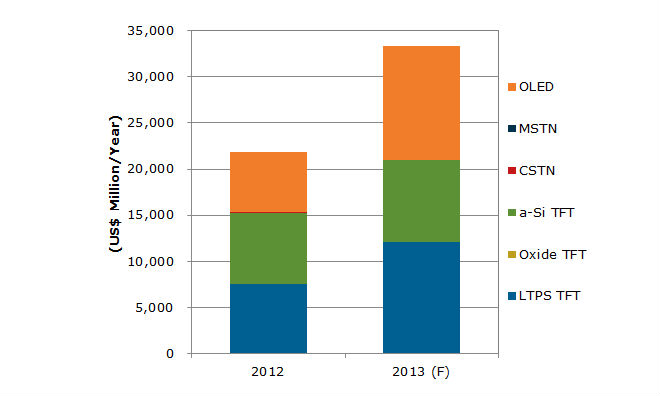 When Apple or Samsung score a win, leading the cheering section may be all the parts manufacturers building components for the popular smartphones. A case in point: mobile display manufacturers, who saw a 55 percent jump in profits between 2012 and 2013.

The success of both smartphones is boosting demand for mobile displays, reports NPD DisplaySearch.

Increased demand and production of the two handsets “has led to increased requirements for high-end flat panel displays, including AMOLED used in the Galaxy S4 and LTPS TFT LCD used in the iPhone 5,” he adds.

Within the iOS-Android duopoly controlling the majority of smartphone sales is the iPhone-Samsung rivalry which sits at the nucleus of the smartphone industry. Circling around the two players is a mobile industrial complex of component manufacturers tied to the fate of the two firms.

As demands of smartphones increase, Apple and Samsung spur on component makers, such as the mobile display firms, to produce more powerful technologies, in something akin to a smartphone arms race.

For Apple, the move from the iPhone 4S to the iPhone 5 brought with it a larger Retina screen housed in a slimmer body. That juxtaposition was made possible with in-cell technology which combines the display’s separate touch layer with the main screen.

While Samsung latest Galaxy S4 and Motorola’s Moto X handsets both use AMOLED technology, Apple has shied away from the display, citing unreliable colors and energy consumption. Instead, Apple is using LCD screen coupled with in-plane switching.

Based on the iPhone’s sheer popularity, NPD expects LCD displays to retain 36.1 percent of the industry’s revenue, just shy of the 37 percent predicted for the AMOLED alternative.