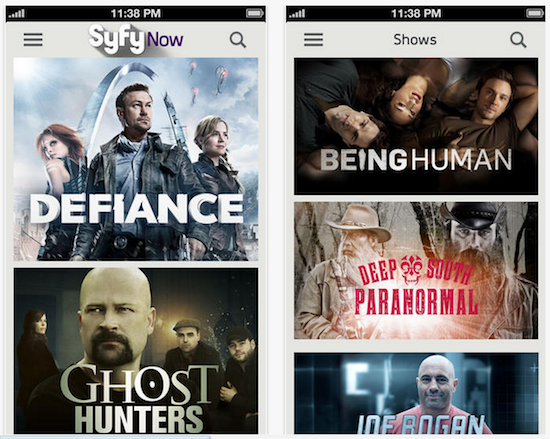 Television channel Syfy announced today that it is relaunching its Syfy for iPhone app as ‘Syfy Now’ and its iPad app as ‘Syfy Sync,’ in an effort to compartmentalize their respective features. Sync, for example, will now be a dedicated second-screen title.

But as for Syfy Now, it’s been completely redesigned with more features like iCloud sync, iPad compatibility, and access to more content. Users can now watch full episodes of their favorite Syfy shows and can find new episodes in the app a day after they air…

“Syfy Now is your destination for full episodes of your favorite Syfy shows, including new episodes available the day after they air for most programs. Once you open the app, log in with your cable or satellite provider account to gain access to the currently available episodes. The same app works on your iPhone, iPad or iPod touch – you can even sync your watchlist and in-show progress across multiple devices via iCloud.”

The app itself is great. The graphics are sharp, the animations are smooth and instant, and the menus are very easy to navigate. The whole thing is on par with other top TV channel apps like those we’ve seen from A&E Networks and the Food Network.

That being said, there are some restrictions. While anyone can use the app to view TV listings and do other things, you’ll have to login to prove that you’re a paying cable subscriber to watch full episodes. Obviously that will be a deal-breaker for a lot of folks.

Still, if you’re a cable subscriber, though, and are a fan of Defiance, Joe Rogan Questions Everything, or any of Syfy’s other popular shows, I recommend checking out the app. You can find it in the App Store, for both the iPhone and the iPad, for free.