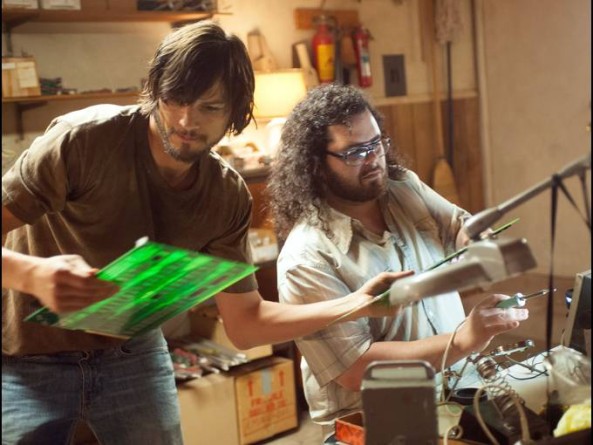 Looking at review aggregation site metacritic, the flick scored a decent 43 out of 100, but over at Rotten Tomatoes, it scored just 25 out of 100. Want to see what others thought about the movie? Keep reading for our review roundup…

“Written by Matt Whiteley, the movie is bookended by scenes of the middle-aged Jobs, doing what some believed he did best: pitching new products. Fuzzed up and hunched over, Mr. Kutcher looks somewhat like the young Jobs, and there are moments — as when he gives another character a small, devious look as if sliding in a knife — that the casting seems more than a matter of bottom-line calculation. But Mr. Kutcher doesn’t have the tools that some actors use to transcend weak material and either he didn’t receive any help or didn’t allow any real direction from Mr. Stern.”

“Although I think I could watch a whole movie called “Woz” and not grow tired, “Jobs” eventually begins to suffer from an ailment common to many biopics: milestone fatigue. The film is so thick with Jobs’s career highlights and lowlights that there’s little room for insights. What made this famously private man tick?

Kutcher tries to tell us, but “Jobs” keeps getting in the way.”

“Casting Ashton Kutcher as Apple’s mercurial trailblazer, Steve Jobs, could have backfired big-time. It’s one thing being the highest-paid sitcom star on TV, another for Charlie Sheen’s replacement on Two and a Half Men to find the gravitas to play a computer-and-marketing visionary pursued by personal and professional demons. Kutcher nails the genius and narcissism. It’s a quietly dazzling performance.

Steve Woz himself actually reviewed the film for Gizmodo:

“I felt bad for many people I know well who were portrayed wrongly in their interactions with Jobs and the company. The movie ends pretty much where the great Jobs finally found product success (the iPod) and changed so many of our lives. I’m grateful to Steve for his excellence in the i-era, and his contribution to my own life of enjoying great products, but this movie portrays him having had those skills in earlier times.”

“But Jobs (* * out of four; rated PG-13; opens Friday nationwide), the biopic starring Ashton Kutcher as the late co-founder of Apple, can’t seem to decide whether to glorify the man for his achievements or vilify him for his megalomania. One thing it doesn’t do is offer a revealing look at the mercurial entrepreneur. The movie that bears his name settles on a blandly superficial treatment of a deeply complex man.

As you can see, there were some very different takeaways on how Kutcher did as Steve. Most thought he did ok, though, and blamed the bulk of the film’s problems on an uninspiring script and lack of direction from behind the camera.

There were also, it sounds like, a lot of concerns about the accuracy of some of the events in the film. But as I’ve said before, that’s going to happen anytime you have a movie based on such a high-profile topic or subject, like Steve.

Regardless, I’m still looking forward to seeing the film this weekend. How about you?