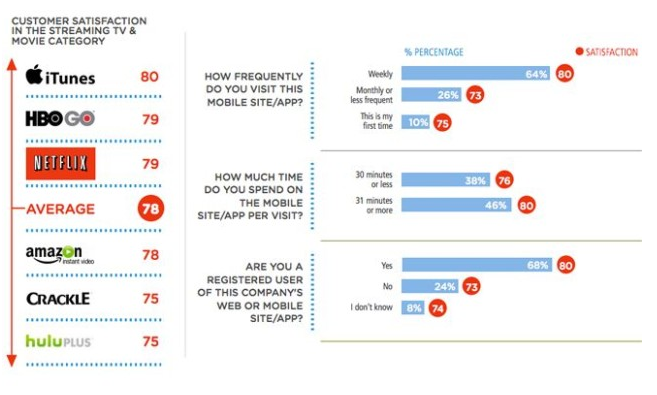 When it comes to iTunes and video streaming, the Apple service is often overlooked by iDevice owners because it is always there – no app is downloaded, no service subscribed. It is that ubiquity that appears to have garnered iTunes high customer service satisfaction when it comes to streaming video.

However, right on its heels are traditional streaming video operators, such as HBO Go and Netflix. But are we comparing apples to oranges, since iTunes doesn’t stream content in real-time on computers, giving consumers the false impression of superiority…

The survey of consumers by ForeSee found that its panel rated iTunes 80, while HBO Go and Netflix both rated 79. That slight lead was enough to get the Apple press foaming at the mouth. Little noted in reviews is that consumers rated iTunes highly because of its lack of glitches during the streaming.

Here is how a press release frames the issue:

Users want fast page loads and are dissatisfied when error messages or playback issues occur. iTunes’ position on top makes sense, given that it bypasses these performance issues. The study finds that performance is the main driver of satisfaction for streaming websites and apps.

Apple bypasses the issue of page speed and streaming errors by requiring you to first download the movie or TV episode from their server to your computer.

Then the complete video is displayed (unless accessed from your Apple TV).

By contrast, Netflix and others take the riskier path directly streaming the video directly from their server. Apple’s method counts on you overlooking the download time in exchange for nearly flawless playback. True streaming services want your movie to begin seconds after hitting the “Play” button despite the possibility a playback glitch might happen.

Despite the two vastly different “streaming” models, headlines blare that Apple’s iTunes beats the stuffing out of giants like Netflix.

While I’m as happy to declare the superiority of Apple as anyone, I think we need to be straight with our readers. Saying Apple’s iTunes handily wins in the streaming category bends the truth to the point of a pretzel-like shape.

At some point, there needs to be a balance between simple click-bait and the facts.