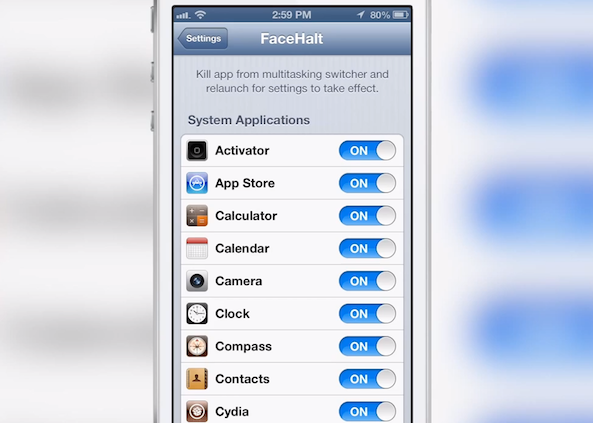 Samsung’s Galaxy S4, released back in the spring of this year, is loaded with a number of unique software features. And one of them that has been getting a lot of attention is Smart Pause, a mechanism that auto-pauses a movie when you look away.

While I myself have never lusted after such a feature, I can see how it would come in handy in a variety of situations. So I was happy to find out that you no longer have to buy a Samsung device to get it. You just need the new ‘FaceHalt’ jailbreak tweak…

FaceHalt is a recently-released tweak that, again, works just like Samsung’s Smart Pause feature. Using the front-facing camera of your iOS device, it can detect when you look away from your display and automatically pause the video you’re watching.

The tweak is compatible with iPads 2,3,4 and the iPad mini, the iPhone 4S and 5 and the 5th gen iPod touch. And the developer says that it can hook into most applications, though apps with custom implementations (like VLC) need a little more work.

FaceHalt is activated via the Settings app, using the enable/disable toggle. Once it’s enabled, your videos will play and pause based on your gaze. For manual control, you can double tap on the Pause button to stop it, and press Play again to restart it.

This is one of the reasons I love the jailbreak community. Here you have this feature that a major tech company like Samsung uses to advertise its flagship handset, made by an independent developer for iOS users. FaceHalt is in the BigBoss repo for $2.

Let us know what you think of FaceHalt down in the comments.