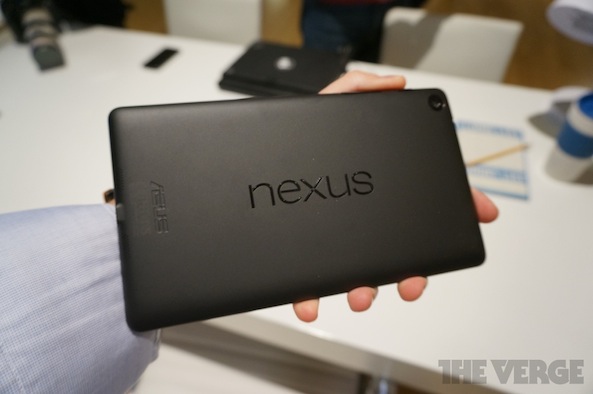 On Wednesday, Google unveiled a new version of its Nexus 7 tablet. And on paper, it looks great. It’s both thinner and lighter than its predecessor, and features a number of upgrades, like a hi-res 1,920 x 1,200 display. But so far, iPad users aren’t impressed.

That’s at least according to electronics buyback site Gazelle. The company says it hasn’t seen any kind of spike in iPad trade-ins since the new Nexus 7 was introduced, or in the rumor-filled weeks leading up to it. But first-gen Nexus 7 trade-ins on the other hand…

Gazelle tells TechCrunch that there was a 333% increase in the number of Nexus 7 trade-ins the day of Google’s event, compared to the same day last week—Gazelle’s biggest Nexus 7 trade-in day to date. And, in the days ahead of the event, it saw a 442% increase.

“The Nexus 7 trade-in activity spiked so high that it made up nearly a quarter of all trade-ins for non-iPad tablets since the site began accepting them earlier this year.

Wednesday, the day Google made its announcement, was also the biggest Nexus 7 trade-in day at Gazelle to date, beating the next biggest day by 380 percent. That previous record was set when the new Nexus 7 leaked on July 17, which clearly prompted early adopters to take advantage of a small head start ahead of the big reveal.”

By comparison, Gazelle says it didn’t see any kind of notable increase in iPad trade-ins the day the Nexus 7 was launched, or in the days leading up to it, implying the tablet isn’t winning over current iPad owners. Of course, there’s nothing scientific about its findings.

If I had to wager a guess, I’d say that a majority of iPad owners aren’t trading in their tablets for two reasons. One, because they are way too invested into the iTunes ecosystem (purchased apps, media, etc.) to switch, or two, because they’re waiting on Apple’s move.

The Cupertino company is expected to unveil two new tablets this fall. There’s the iPad 5, which is said to feature a major redesign, and the second-gen iPad mini, which may or may not have a Retina display. I’d like to see slate trade-in numbers around that launch.