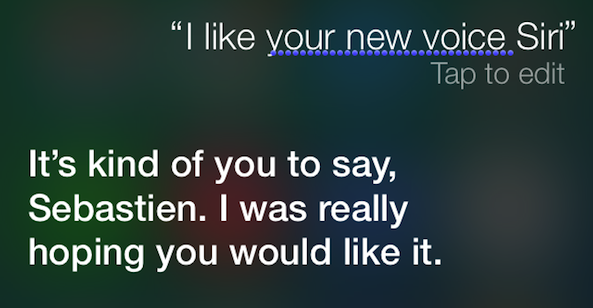 Earlier today, Apple released the second beta of its next-generation mobile operating system, iOS 7, to developers. The update comes exactly two weeks after the original beta of iOS 7 was released, and brings with it a number of new features and improvements.

One of the more prominent changes we’ve seen has to do with Siri, Apple’s snarky digital assistant. Not only has it gotten smarter, but in beta 2 the virtual secretary received new voice templates. You can now choose from a male or female voice in several languages…

When Apple demonstrated Siri during the iOS 7 portion of its WWDC keynote, it mentioned that it had given the assistant new, more realistic-sounding voices. And true, they sounded great, but they were not present in the initial beta of the new operating system.

They are, however, available in the 2nd beta. And just as they did on stage, they sound great. I think the female voice sounds more genuine than the male voice, but they both tend to have slip ups where they revert to sounding like robots. I’m sure they’ll get better.

Here’s Jeff with a hands-on look at the new voices:

Siri has taken a lot of heat since it was first unveiled back in 2011. That was two years ago, and not only is it still marked as ‘beta,’ but many folks feel it has been surpassed by competitors like Google Now. Apple, though, is looking to change the conversation in iOS 7.

Stay tuned to iDB today, as we continue to highlight all of the changes found in iOS 7 beta 2.

What do you think of Siri’s new voices?