According to a media release, the new firmware enables new standards offering throughout the range for the 2014 model year.

As for Siri, release notes mention “enhanced voice command options including available message dictation and integration of both Apple Siri and Samsung SVoice through the vehicle’s voice command controls.”

With the latest update to BMW iDrive, both Apple Siri and Samsung SVoice can be accessed through the vehicle’s voice command controls. With a paired device, pressing and holding the steering wheel voice command button will engage the device’s voice access.

Pressing the steering wheel voice button without holding it will continue to access the vehicle’s voice command functions.

They enhanced integrated Google search with the ability to search for points-of-interest via voice. Once the user has spoken their POI, the navigation system takes over and guides the driver to their desired destination.

These new capabilities will be supported by means of a SIM card integrated into the vehicle, which means an owner can simply pop in a data-only SIM card to access various online features without having to connect through their smartphone’s or tablet’s cellular connection. 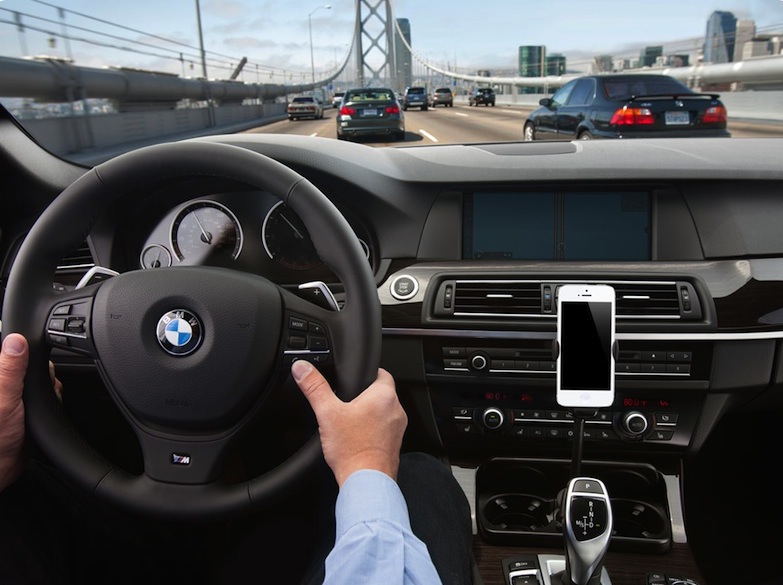 The new software also brings a significant update to the latest BMW iDrive user interface and the ability to add services after you’ve purchased the vehicle.

Integration with the BMW Apps platform will be available for Android devices “later this year,” BMW said.

As for the updated BMW iDrive interface:

BMW’s iDrive will see significant enhancements for model year 2014. Not only will more models receive the latest iDrive 4.2, but the system gets enhancements that improve the user experience in the areas of navigation, Advanced Real Time Traffic Information, connectivity, entertainment, online access and voice commands.

One example is the ability to engage automatic time setting. When active, the time will automatically be adjusted for Daylight Saving or Standard time as well as changes in time zone while traveling.

BMW and Apple have always had a productive relationship – back in 2004, the German firm featured the very first in-car integration of an iPod in BMW cars.