Last month, BlackBerry caused a lot of commotion in the tech word when it announced that BBM would be coming to Android and iOS this summer. The popular messaging app has always been exclusive to BlackBerry.

The Canadian-based handset maker didn’t offer up any further details at the time on when the app would be available on the two platforms. But according to T-Mobile UK, it’s going to be landing on them later this month…

Great news – BlackBerry Messenger will be available to download on iOS and Android from June 27th! 🙂 #BBM twitter.com/TMobileUK/stat…

BusinessInsider’s Steve Kovach isn’t buying it, saying he spoke with a source with “knowledge of BlackBerry’s plans” and the date is not correct. In fact, he says, the source called T-Mobile’s June 27 BBM report “bogus.”

It’s unclear, then, why T-Mobile decided to tweet what appears to be exclusive news. There have been some scattered rumors of a June 27th launch date, but nothing has been confirmed by BlackBerry PR yet.

At any rate, when BBM does land on iOS, it sounds like it will only be coming to the iPhone. Blackberry’s software portfolio chief Vivek Bhardwaj said last month that the app would be available for “iOS phones running iOS 6 or higher.”

Update: ok, so we have a few things to add to the report. The first is that BlackBerry has issued a statement on the story (via Phandroid): “We haven’t announced a date other than BBM for iOS and Android is coming this summer.”

The second is—surprise!—T-Mobile UK has deleted the above tweet regarding BlackBerry Messenger. And the third is that we have been sent a couple of images of what looks like a countdown to BBM’s release, and a shot of BBM running on an iPhone. 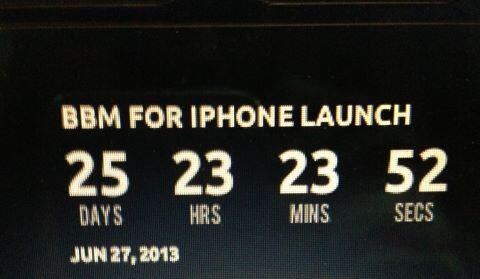 Admittedly, with no original source or any other additional information, these images are sketchy at best. But we thought they might be worth posting for discussion purposes.