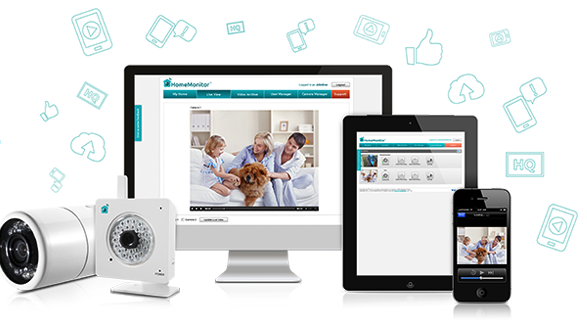 As many of our frequent readers know, I am a fan of connected home products. In particular, several home Wi-Fi cameras are covered through our review section and today I take a close look at the Y-cam HomeMonitor system.

Developed by Y-cam Solutions, the 2005 startup company strives to create simple and affordable products for home and small business protection. In addition to hardware, software and firmware are also continually improved, according to the company description. I can vouch for their efforts having already received a firmware update since installing the unit.

Setting HomeMonitor apart from the competition, is the ability to store a full week of motion captures on company servers for no subscription charge. However, while offering a good benefit package, Y-cam HomeMonitor struggles on some basics…

Y-cam Solutions, failing to list a true size measurement online, I will guess is about 2.5″ square with a small bracket style mounting arm. The image resolution max is 640×480 (VGA) outputting 30fps in MPEG-4. The night vision is driven by infrared and viewing distance, including clarity, is heavily dependent on the environment and ambient light. To get everything up and running, first connect the camera to the internet. 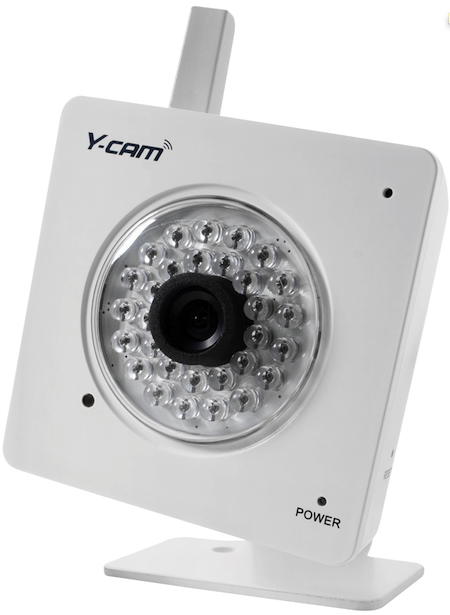 Setting up the camera, particularly connecting to the internet, is where I first began doubting the technology. Opening the box, I was dismayed to find a CAT5 ethernet cable. No modern Wi-Fi enabled product should require a CAT5 cable. Reading through the quick start guide, my suspicions were confirmed: the device needs to be directly connected to a router before initiating the Wi-Fi connection.

Once you fumble around inside whatever cabinet you have the router stashed, grab the CAT5 cable and plug the camera directly into the router. Then, it can be setup from the initiation site, to operate solely via Wi-Fi. The setup video gives you the quick run-down in less than 60 seconds, but in actuality, it took about 25+ minutes to get everything running. I wouldn’t consider myself a rookie with Wi-Fi cameras, either.

I encountered problems with the camera accepting my Wi-Fi password (yes, I typed it correctly). Every time the unit attempted connecting to the network, it took 1.5 minutes. There is even a little timer that pops up showing your fateful wait. On try 5 or 6, I lost count, it finally connected to the network. No, I do not have any set firewalls or a dynamic dual band router to cause such problems. To keep from belaboring the point, I will move on to discuss the operability.

Typically, I would title this section something like “How well does it work,” but I am calling that into question as well. After the initial setup, things seemed to be running fine, until the camera stopped showing the video feed for about two days. The microphone was picking up audio, but no video from the camera. Powering the unit off and back on seems to be doing the trick, for now. It has also inadvertently dropped the network connection, which is explained in the third most viewed help article on the Y-cam HomeMonitor support page, but managed to reconnect itself.

The camera can be viewed and modified via an online dashboard. The motion detection schedule can be set, giving hourly control across the week. This schedule is a great feature, providing a way to disable motion detection notices during occupied times. A live feed is also accessible and the user can setup to two trigger zones to monitor movement, shown in the image below, which brings me to the iOS app. 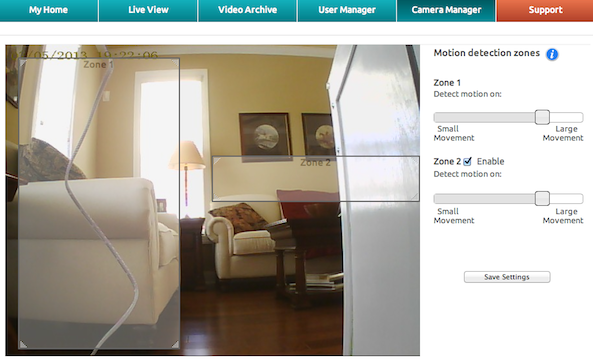 The HomeMonitor app is the weakest offering I have come across in the connected home arena. There are only three controls in the app , power on/off, motion detection on/off, and notifications on/off. In addition to the control switches, a live feed and archived motion videos are viewable. However, from the app there is no way to change the schedule or set the monitored areas of the feed. Most importantly, the app does not provide push notifications for motion detection. The only notice for detection is an email.

The lack of push notification is worth extra attention. Buying a remote monitoring camera should provide a mobile way for easy notification. If there is motion in my home when I am not expecting it, having an email slip into by inbox between spam messages is hardly proactive and, consequently, the biggest downfall of this solution. I questioned the company about the lack of push notification and was told the advantage to the Y-cam HomeMonitor system is the unlimited and free 7 day archiving system. While I do agree the free archive is an excellent offering, archives are penultimate. Push notifications are of primary importance. 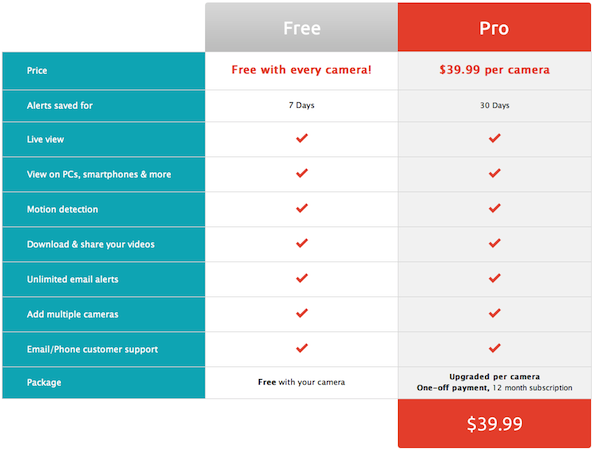 It is a camera, after all, and my review would be inconclusive without talking about video quality. In short, the video quality is spot-on. Simply, it is great. I was standing about 25 feet away from the unit and you could tell I was chewing on a snack as I perched from the stairs making sure the camera was up and running. Several competitors cannot boast such a strong image clarity or they sacrifice frames per second for crisp detail. Let there be no mistake, Y-cam HomeMonitor does not lack in the video department. The audio is slightly obnoxious, as it always sounds like there is feedback, but the video is pristine for a in-home consumer grade product. Proving its clarity, I invite you to view their demo camera posted at a zoo in Denmark.

There are a few things Y-cam HomeMonitor gets right. Seven days of unlimited motion storage for no subscription cost is an excellent and generous offer. Additionally, the video feed is very high quality in comparison to some other vendors, but the lack of simple and expected features prevent me from making this a recommended product for iOS savvy readers, like those on iDB.

I had a bad taste in my mouth ever since the CAT5-cable-requiring-setup process. My feelings toward the Y-cam HomeMonitor system only soured as I lost video feed, had to restart my camera, and can only get notifications via email. There are plenty of competitors that have push notifications, two-way audio, night vision, archive capture and are less expensive. The Y-cam HomeMonitor clocks in at a whopping $159 retail. With a few basic features missing, I say wait until updates are made to the offering list, then check back in. If Y-cam HomeMonitor can combine its great video feed with the basic iOS requirements, this would be a knock-out product.