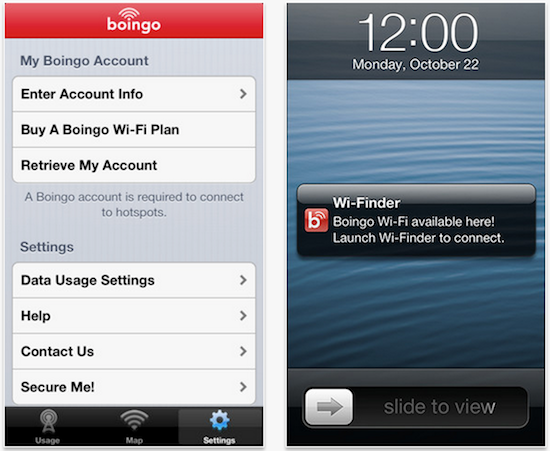 You wouldn’t think that an update to an app that maps out Wi-Fi hotspots would be newsworthy, but this new release from Boingo Wireless could have a significant impact on how travelers access the internet.

The hotspot provider updated its Wi-Finder app today with the ability to sign up for access to its wireless internet in-app. So signing up for a Bingo subscription is now as easy as typing in your iTunes password…

“Boingo Wireless (NASDAQ: WIFI), the leading DAS and Wi-Fi provider that serves consumers, carriers and advertisers worldwide, today announced that iOS users can now use their iTunes account to purchase a Boingo subscription, making it easier than ever to enjoy Wi-Fi access at more than 600,000 hotspots worldwide.

Per the App Store business model, this means that Boingo will be handing over 30% of the revenue it makes off in-app subscription purchases to Apple. But obviously, it’s hoping to offset the loss with new customers.

For example, I rarely use pay-for Wi-Fi hotspots now while traveling due to their complicated checkout processes. But if I could just pay using my iTunes credentials, I’d be much more likely to check it out.

Other benefits of Boingo’s Wi-Finder app include a VPN (Virtual Private Network) service, which keeps your connection on public Wi-Fi hotspots secure, and the ability to track your device’s monthly data usage.

If you’re interested in checking out Wi-Finder, you can find it in the App Store for free. The plan costs $7.99 per month, and provides unlimited Wi-Fi for all your iOS devices via Boingo’s 600,000+ global hotspots.

What do you think, will you be more apt to use Boingo’s Wi-Fi service after today’s update?