Apple, which for years has acted as an engine for much of the tech industry, may report slowing profits for the first time in a decade. Talk of a slowdown comes as the consumer tech giant deals with the triple-threat of slimmer profit margins, falling iPhone demand and heightened competition. Ahead of Tuesday’s second-quarter earnings report, Wall Street has entered a “show-me mode” as investors look for reassurance the firm can promise a rosier future…

“The market needs to see some evidence that the future looks bright because that candle is flickering,” Oracle Investment Research analyst Laurence Balter told Bloomberg News.

To answer investors such as Balter, Apple may hike its stock’s quarterly dividend to $3.10 per share, analysts told the news agency. Timing of such a move is disputed, with some on Wall Street expecting the iPhone maker to announce a dividend increase along with tomorrow’s revenue numbers, while other analysts predict share returns will be raised later.

Hedge fund manager David Einhorn made headlines when he suggested Apple return some of its $137.1 billion in cash to investors.

The reasons for Apple’s profit plight is well-known: the iPad mini is among lower-priced products the company has introduced, trimming a usually fat profit margin. At the same time, sales of the iPhone continue to grow, but at a slower pace.

Then there is Samsung, the South Korean smartphone company which has employed many Apple-like tactics. Samsung is expected to release its latest Galaxy S4 later this week. 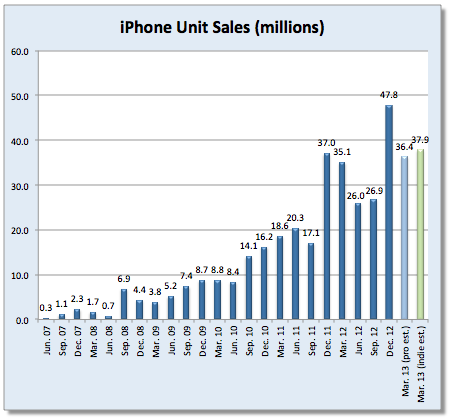 As a result, Apple is expected to announce selling 35.4 million iPhones during the second quarter of 2013, up from 35.1 million sold during the same period in 2012, according to analysts polled by Bloomberg. Last year’s second quarter iPhone sales were 88 percent higher than in 2011, an increase most on Wall Street do not believe will be repeated.

Instead, the median estimate is for 37 million handsets sold during the quarter for 5.5 percent growth. That’s the word from Fortune, which polled 30 Wall Street pros and 18 amateurs. Independent Apple watchers forecast an 8 percent iPhone sales growth rate, twice as high as professional analysts.

At the extremes, Michael Contant of the Braeburn Group was most bullish, predicting on March 30 Apple would announce 42.5 million iPhones sold during the second quarter. By contrast, Shaw Wu of Sterne Agee forecast 32.5 million iPhones were sold.

The graph below shows professional quarterly iPhone estimates in blue with independent forecasts in green. 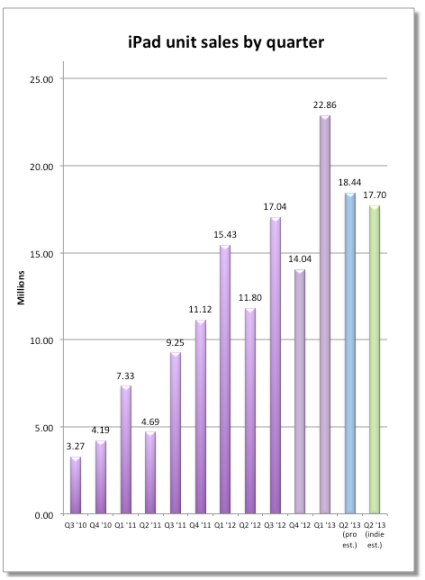 As for estimates on how many iPads Apple sold during the second-quarter, the usual disparity between professional and independent analysts is reversed. Most times, independent Apple watchers express more exuberant expectations while the pros stick to conservative forecasts.

Professional analyst are expecting Apple to sell 18.4 million iPads for the quarter ended March 29, according to Fortune. The average for independent analysts is 17.7 million.

Although demand for desktop and laptops are not as hot as tablets and smartphones, there is reason to rejoice – if you are a Mac fan. While PC sales fell anywhere from 11.2 percent to 14 percent compared to 2012, Mac sales are expected to be up slightly.

According to Fortune, Apple is expected to announce sales of 4.1 million Macs during the second quarter, up 2 percent from the 4.017 million sold during the same period of 2012. 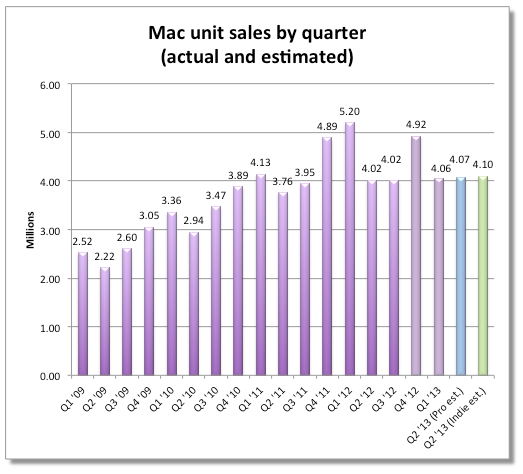 At the extremes, J.P. Morgan’s Mark Moskowitz is forecasting 4.61 million Macs for 14.7 percent growth. At the other end, Topeka’s Brian White expects 3.19 million Macs, a 20.7 percent decline from the same time in 2012.

We won’t know until later today just how well (or poorly) Apple did during the second quarter. To tide you over, here is a comment made to Bloomberg showing investors still haven’t gotten over the loss of Apple co-founder Steve Jobs.

Speaking about Apple’s penchant for keeping upcoming products secrets, Oracle’s Balter says its just not the same with Tim Cook in charge.

“It was OK when Steve Jobs would say we have some great things in the product line, but right now that credibility has been lost.”