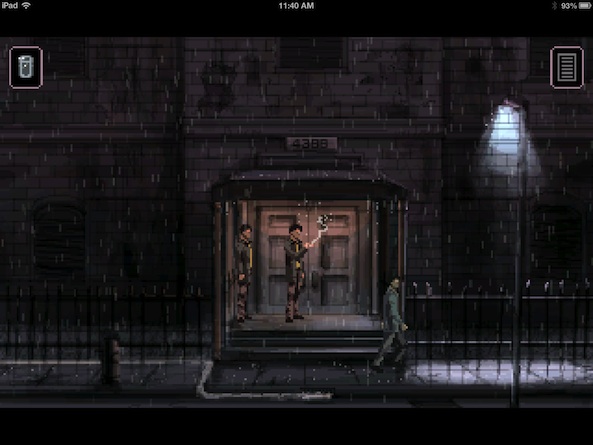 Point-and-click adventures are beginning to make a dent in the gaming community. There have been some well-made releases within the past few months that have certainly sparked my interest. Abyss: the Wraiths of Eden HD, for example, had me sweaty palmed and stiff necked from hours of gameplay. The more often developers port desktop games to iOS, the better it is for me because I like being able to pick up and play epic adventures anywhere.

You may have already heard of Gemini Rue. It was originally created for Windows in 2011 and was just ported to iOS a week ago. The game may only be a few years old, but it has a retro design that will put you in pixilated heaven from the first beat.

Gemini Rue, for the iPhone and iPad, takes players on a noir-like adventure set on a mining planet in a future where citizens must prove their residency or be deported off world. The game’s plot develops slowly and deliberately. One false move and you’ll be pushing up daisies…

The app is designed to look like it was meant to be played on a boxy desktop PC circa 1992. The images are dark and heavily pixilated. Even the text has that “D.A.R.Y.L.” look to it. I’m not saying that Gemini Rue looks like a 10-year-old boy. I’m just saying that the game’s graphics are pretty old school.

Players are thrown into a side-scrolling world that is dimly lit and always raining. To get hints on objects that you can interact with, hold down your finger on the screen. Similar to point-and-click adventures, this is a touch-and-tap adventure.

The interface is a bit awkward for players new to the game. You’ll have to access your communicator in order to find out information about people you need to find and places you need to go. Instead of simple touch-based action, players must listen to the non-player characters (NPC) and use the information gleaned to find the next piece of the puzzle. It is less visual and more data based.

If you get stuck for some reason, you don’t have to restart your game from scratch. You can load the most recent auto save and only have to backtrack a bit. For example, if you tell the receptionist that you are a cop, he may not want to help you out. If you can’t get him to give you the information you need, you can start from the previous save and try again.

You can adjust the game’s difficulty and audio volume in the settings screen. You can also toggle on and off the voice-over feature and remove the character portrait pop ups.

Controls are touch based. Shooting weapons requires some minor button pushing, but everything else requires taping different areas of the screen. 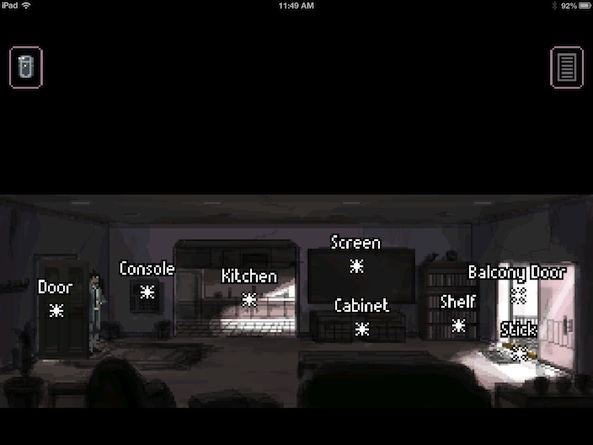 Players start off watching a short clip of a man about to have his memory wiped. Then, it switches to a detective on a mining planet. The first part of the game has you controlling Azriel Odin as he tries to track down an old war buddy. Then, the game switches back to the man that was getting a memory swipe and you discover that it is inmate Delta-Six and he tried to escape from the hospital again. The game continues to alternate between Odin and Delta-Six as you uncover the connection that the two characters share.

Players talk to in-game characters in order to learn information that is needed to get to the next part of the story. For example, early in the game, you will need to use your ID card to access the information terminal. However, since Odin is from off world, he doesn’t have an ID card. Talk to NPCs that you pass by in order to find out how to use the terminal. A friendly citizen may have just what you need.

Oftentimes, you will be given a choice when talking to NPCs. You may want to lie or tell the truth when speaking with someone. If the character doesn’t like your response, you may be out of luck getting information that you might have otherwise received from that character.

To interact with an object or person, tap it. A control menu will pop up and you will have the ability to look at it, touch it, talk to it, or kick it. You will also see a list of your inventory items, which you may need to select, depending on the current situation. For example, if you come to a door, you can touch it to see if it is locked. If it is, you can then use your lock pick to open it. If you are not supposed to use an item, the game will let you know. 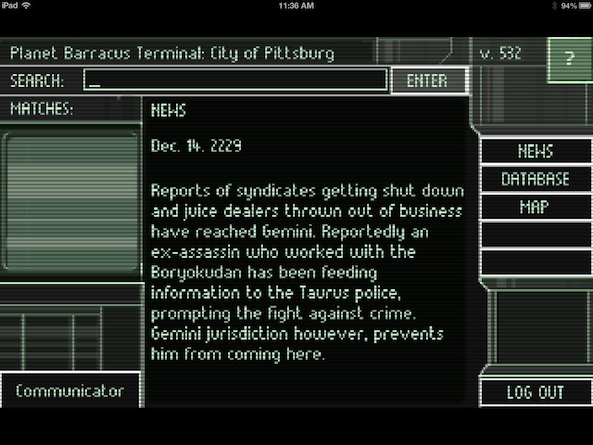 Gemini Rue is regularly priced at $4.99, but is on sale for a limited time for $3.99. The game is worth about $6.99 for its depth and plot-driven gameplay. It will take you a long time to get through it, so you aren’t wasting your money on this adventure. The replay value is very low, since the story is the same no matter how you get to the end. However, the game’s plot is rich enough to make you feel like $3.99 was money well spent. It is available for the iPhone and iPad, so you can play it on multiple devices for one price.

If you like point-and-click adventure games and have an affinity for pixels, this game is right up your alley. The story is interesting and the puzzles are a hearty challenge. New players will have trouble figuring out the game’s semantics, like using the communicator or information terminals, but if you understand basic point-and-click gaming, it will become clearer as you play. For gaming noobs and Retina-philes (yes, I just made that word up), Gemini Rue is supposed to have low-quality graphics. If you don’t “get it,” don’t buy it.