Remember how Apple’s use of Chinese factories to produce its iPad was the focus of attention during 2012? Well, so did members of the Pulitzer committee, which Monday awarded a 2013 Pulitzer Prize to the New York Times.

The paper won critical awards for its iEconomy series, a nine-part look at the working conditions in Chinese factories producing the popular tablet. But was the series a “penetrating look into business practices by Apple,” as the Pulitzer announcement claims, or simply a way to rehash a common practice by using the Apple brand as the foil?

As far back as January of 2012, Fortune’s Philip Elmer-DeWitt has pointed out Apple was a “big, fat, easy target” for reporting looking to put a corporate face on global manufacturing.

Never mind that Apple’s competitors all outsource work, sidestep taxes, use patents as weapons and turn an even blinder eye to labor abuses in the Asian supply chain. The fact is, Apple – always a draw for readers – made a big, fat, easy target.

On Tuesday, he wrote:

It didn’t matter that every major U.S. electronics company assembles its products under the same working conditions – or worse.

This doesn’t mean the press should be apologists for Apple.

We’ve jumped on the company numerous times for its evasions and marketing speak which too often undercuts reality. When the Times reported on the conditions under which our favorite gadgets are built, the news was published far and wide.

But Apple has made numerous changes, many receiving far less attention than the original series. For instance, Apple now requires its suppliers to record overtime by workers. Earlier this year, the company said 99 percent of its supply chain was in compliance. 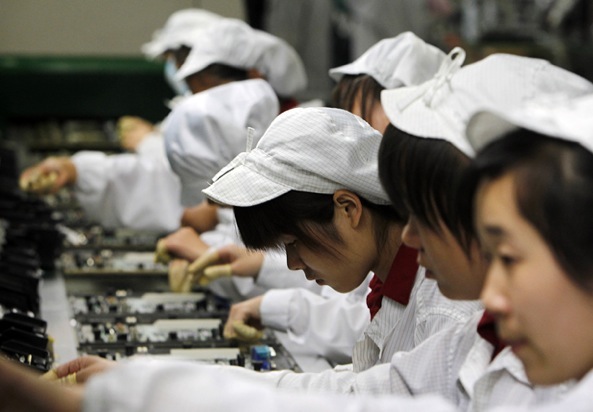 At another point, Apple dropped a supplier after checks found underage workers.

Does all of that mean Apple deserves a halo (likely produced in a Chinese factory)?

Plenty remains wrong with Apple – and other firms producing some of the most-popular electronic devices.

But we have to wonder if the New York Times series would have received the same degree of critical awards if instead of Apple, the subject were Acme Widgets producing just another product lost among the millions of other items routinely made in China factories and sold in our local big-box retailers.

At any rate, after Foxconn deploys those robots, the proverbial factory girl – and with it criticism of Apple’s supply chain woes – could become a thing of the past.