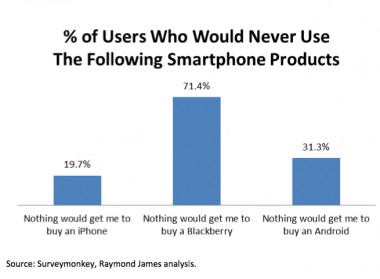 Finally, a survey appears where BlackBerry is leading the big guys. On a twist of the usual polling of which device consumers want to buy, one research firm asked what smartphone would you not be caught dead using. The BlackBerry “crushed” the competition in the ‘don’t want’ department. In fact, 71.4 percent of consumers polled by Raymond James said no feature would get them to use a BlackBerry.

Basic math tells us this corresponds to nearly three out of each four respondents. Additionally, nearly twenty percent said you couldn’t give them an iPhone, or one out of each five. And, just over thirty percent replied they’d never touch a smartphone powered by Google’s Android, or approximately one out of each three…

The poll by Raymond James asked the usual questions about what features might prompt consumers to purchase one smartphone brand over another, but it was the “don’t want” question which seemed to highlight just how stark the “love-hate” relationship has become in mobile technology.

As AllThingsD writer John Paczkowski commented, the poll well illustrates “the platform partisanship that’s so rife within the smartphone space.”

The camps of Apple and Android are further bolstered by the common description of smartphone competition as a duopoly.

Such a landscape provides little room for a third party.

As today’s poll results show, features do not matter, making it nearly impossible for BlackBerry or Microsoft’s Window Phone to gain any real traction.