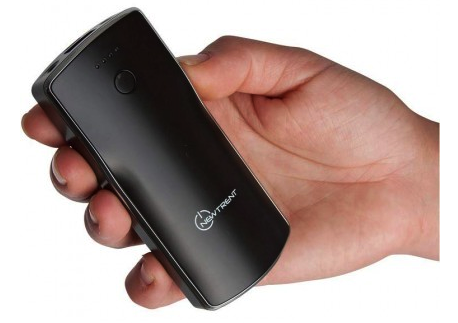 Since my visit to CES 2013, a quest for a backup portable iPhone charger began. Running around the world’s largest trade show peddling for power was pretty ugly. New Trent was kind enough to send one over for review and it fitted the bill for my charging woes. A simple, travel size device, the iTorch IMP52D provided a full charge in just under 2 hours for my iPhone 5…

The iTorch fits in your hand at 4″ x 1.8″ x 0.9″. Enclosed in a sleek black and chrome design is a 5200mAh battery that charges via micro USB and outputs via a standard USB cable. The device takes a shocking 6 hours to charge before reaching full capacity and can be charged from a USB port or wall charger. The unit does not come with its own AC adapter, instead relies on your existing device wall charger. Eliminating the adapter eliminates cost and I would never use it anyway, for the same reason they do not provide it.

After completely charging the iTorch, I let it sit for about a week prior to my test. I would use a device like this as a backup and would rarely immediately use it to charge my iPhone. When I started the charge, the iTorch’s 4 LED lights indicated it still possessed a full charge.

My iPhone contained 5% battery life when I plugged in the iTorch and began charging. After ~1 hour 50 minutes, my iPhone 5 received a full charge. Once I confirmed the full charge, I noticed the iTorch showed one solid blue LED and one blinking, indicating a remaining capacity of ~30%-35%.

It is important to note, my iPhone was powered on during the charge, which will adversely affect the charging ability of the iTorch. However, this is how I would use the device outside of a product review. According to New Trent’s website, the iTorch is capable of charging an iPhone 5 up to 3 times, which I refute. Perhaps, in ideal conditions, where the iPhone 5 is turned off during the charge and the iTorch, itself, was just charged, there may be a way to charge an iPhone 5, 3 separate times.

In a more realistic setting, it appears I would be able to get about 130% battery charge from the iTorch. This predicted amount, based on my test, is less than half of the advertised cycle strength. Also, note the iTorch is not marketed as a charging device for iPads, just smartphones.

If you are interested, there is also a built-in LED flashlight and laser pointer. Personally, these are useless for my personal reasons, but, why not? The power button is a little confusing, as it also operates the flashlight and LED depending on how long it is depressed. Additionally, the carrying pouch is a nice touch, but may not always prevent the button from being depressed in a backpack or purse, causing unnecessary battery drain.

While the iTorch does not appear to provide a full 3 cycle charge on my iPhone 5, considering realistic usage conditions, I still recommend it as a backup charger because of the price. At $39.95 on Amazon, it is a decent purchase. In a small 4.4oz unit that fits in my hand, I would not expect 3 full charges, but I would expect a full 0%-100% charge in a short period of time.