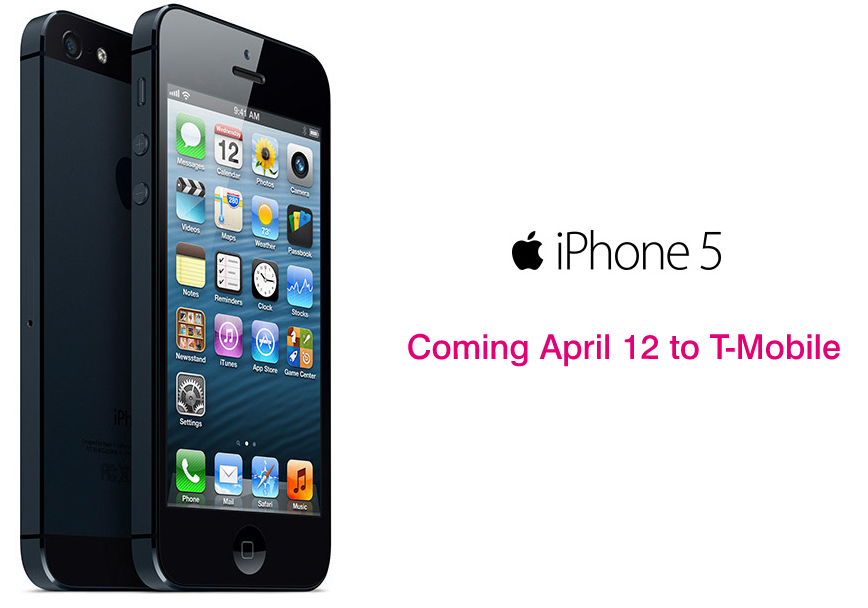 With yesterday’s announcement that Apple’s iPhone 5 will finally start selling through T-Mobile on April 12, we can now compare the total cost of ownership across the nation’s four largest wireless carriers: AT&T, Verizon, Sprint and T-Mobile.

A bunch of outlets ran their spreadsheets to assess the current landscape, including Zagg, best known for its line of protective coverings for consumer electronics.

In figuring out how much one saves on T-Mobile over two years versus other carriers, Zagg concluded that T-Mobile’s contract-free iPhone 5 comes in at a very cool $580 cheaper over two years. However, the difference evaporates if you switch your significant other or an entire family of four to the nation’s fourth-largest carrier…

Sprint by default offers only unlimited option and claims not to throttle data.

Verizon and AT&T, as you know, no longer have unlimited data so Zagg used the current pricing for their respective Share Everything and Mobile Share plans, each offering four gigabytes of cellular data per month.

Based on these terms, T-Mobile’s no-contract iPhone 5 at a total of $2,259.99 over two years comes in at a $580 cheaper than the total cost of owning the subsidized iPhone 5 with the obligatory two-year service agreement with AT&T, Verizon and Sprint, each coming in at the same $2,389.99. 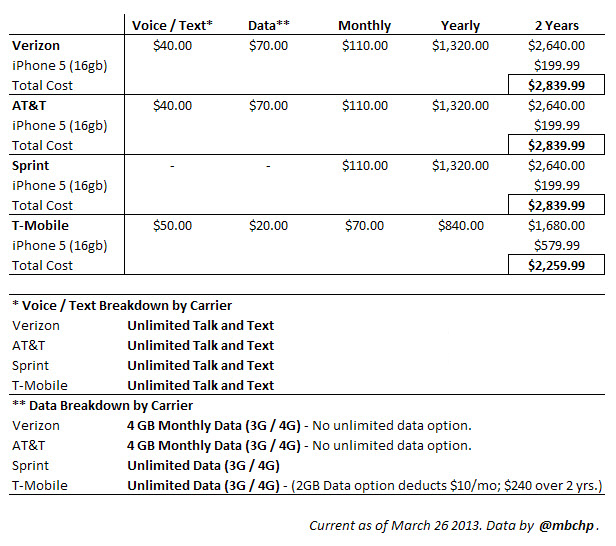 Should you opt for two gigabytes of data instead of T-Mobile’s unlimited tier, you’ll be saving an additional $240 over the two years, resulting in the total saving of $820 – just nine bucks short of the 64GB cellular iPad 4.

John Brownlee of Cult of Mac notes that there’s one carrier that is cheaper than T-Mobile: Walmart’s in-house Straight Talk.

Basically, the iPhone 5 gets cheaper and cheaper to have for 24 months the smaller the carrier gets. Cricket, Straight Talk and Virgin are still cheaper options if you don’t mind buying your iPhone 5 for full price at the start of your contract.

On the downside, LTE doesn’t work on Straight Talk.

If you along with your significant other plan on switching to T-Mobile, you’ll save a tiny amount over two years compared to Verizon and AT&T.

While there’s no denying that T-Mobile’s new plans are the cheapest around, it’s not the slam-dunk the carrier would have you believe.

For a couple of two, it’s about $4,000 for shared data on Verizon and AT&T, or the same price with unlimited data on T-Mobile.

They produced this handy comparison chart.

Whichever way you look at it, T-Mobile is the cheapest of the bunch, for individuals.

In considering your choice of carrier, you should remember that Verizon’s and AT&T’s LTE coverage is much larger than T-Mobile’s. On the other hand, there’s no escaping from those two-year deals at AT&T or Verizon.

By comparison, T-Mobile lets you cancel your service anytime your want, though you’ll of course have to pay up for the remaining monthly installments.

“T-Mobile customers have to make up the difference between what they’ve paid so far and their old phone’s retail value if they want to try a new device,” notes the publication.

As a reminder, T-Mobile sells the iPhone 5 with its new Simple Choice Plan for $99.99 down and $20 per month for 24 months. The devices is not sold tied to a service contract – that’s why the cost of the hardware is spread across monthly installments plus that $99.99 up front payment.

That goes against the industry’s practice of  subsidizing the hardware by requiring people to sing a long-term service agreement. In a way, T-Mobile is basically giving you interest-free financing for the hardware and lower service cost than rival telcos.

The carrier’s no-contract iPhone 4/4S is a $75/$1 cheaper versus the online Apple store. T-Mobile is also the first major U.S. telco to support HD Voice (or Wideband Audio) on the iPhone 5.