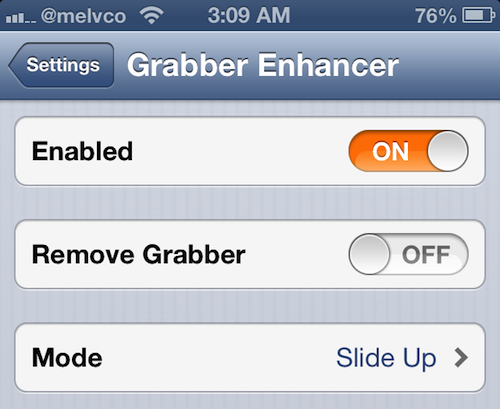 In iOS 5.1, Apple revamped the Lock screen Camera shortcut so that users could access the app with a single swipe. The icon, commonly referred to as the camera grabber, has been very popular with jailbreak developers.

We’ve seen a lot of tweaks involving the icon over the months, and today, we’re adding another one to the list. Introducing Grabber Enhancer, a recently-released Cydia package that adds functionality to the camera grabber…

The tweak has a couple of features. It can either remove the grabber from the Lock screen altogether (leaving just the Slide to Unlock bar showing), or it can make it capable of unlocking your device with a swipe or a tap.

Once installed, you can configure Grabber Enhancer’s options from the Settings app. There’s a toggle to enable the tweak—which should be standard on all tweaks—a toggle to remove the grabber, and the Mode menu.

Inside the Mode menu are three options, Slide Up, Tap and Camera. Choosing Slide up will allow you to unlock your device by sliding up on the grabber. Tap works the same way. And choosing Camera is like disabling the tweak.

Grabber Enhancer works as advertised, but I just can’t see a reason to keep it—there are other grabber tweaks available, with more features. But hey, you may find it useful. And if you’re interested, it’s in the BigBoss repo for free.