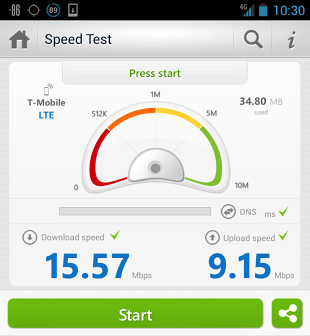 With all the necessary regulatory approvals concerning T-Mobile’s merger with MetroPCS under its wings, the Deutsche Telekom-owned carrier is expected to accelerate its 4G LTE plans. It’s a tad surprising that T-Mobile has put itself in a position where it remains the sole major U.S. telco without high-speed LTE cellular radio technology.

Be that as it may, its LTE situation is about to change later this month. Just last week, a curious user spotted super-fast data speeds on T-Mobile’s network in Astoria, Queens, a New York City suburb.

Shortly after, the carrier officially confirmed that it will begin providing 4G LTE service by the end of this month and now more LTE spots have been discovered in as much as nine major U.S. cities ahead of the official launch…

The numbers should be taken with a grain of salt because T-Mobile hasn’t launched its LTE officially so there’s virtually no traffic on the network.

Additionally, these tests were likely carried out close to cell sites with good signal.

The Bellevue-based carrier told media outlets its LTE rollout “is moving at breakneck speed” and will be ready in time for the BlackBerry Z10 launch “by the end of this month”:

We’re on track to have 100 million Americans covered by LTE mid-year and 200 million people with LTE by the end of 2013. This is in addition to the blazing fast 4G experience we give customers right now covering 220 million people.

The telco also said it will be flipping the switch on LTE in Kansas City and Las Vegas.