With Apple’s cash pile projected to balloon from a whopping $137 billion at the end of the previous quarter to an astounding $170 billion by year’s end, there is a growing call for the iPhone maker to increase its stock dividend as a way to build a safety net under its beleaguered shares. The report of a bulging corporate vault comes as one Wall Street analyst proposes a four-step solution to pull Apple out of the weeds.

According to Topeka Capital Markets analyst Brian White, Tim Cook & Co. should start with raising the quarterly dividend to at least $3.75 per share. A five-year program should begin with Apple increasing the $2.65 per share quarterly dividend paid to investors while also repurchasing up to $100 billion in company stock…

“If debt is part of the equation, investors will be more than happy to see Apple assume leverage to pay out more cash,” White told investors (via AppleInsider.)

The analyst earlier this month pushed for Apple to sweeten the dividend deal, arguing the “timing could be right.”

Billionaire investor Warren Buffett also urges Apple to use the cash to buy back stock. 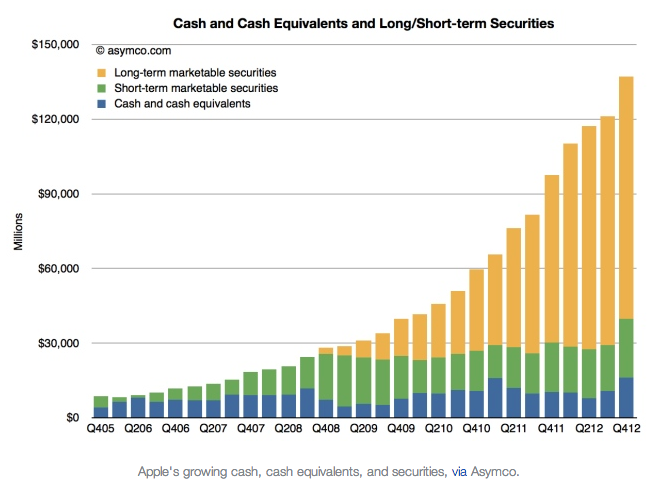 Along with hiking the dividend, White also proposes his “phase two” of a stock turn-around should include a “trough in Apple’s profit cycle.” He expects a nineteen percent drop in quarterly profits before an upturn next quarter.

The analyst is also urging Apple to pursue “new growth opportunities,” including offering low-price handsets and finally sealing a deal with China Mobile, that largest carrier on the planet.

White is also a believer in chatter than Apple should get into new categories, such as televisions and watches. Earlier today, Samsung today confirmed it would join the race for a smart wristwatch.

Apple pundit John Gruber chimed in, saying some significant amount of AAPL’s run-up was based on the notion that Apple’s lack of serious competition would initially lead to an overwhelming market share advantage for the iPhone.

“When it became clear it wasn’t going to happen,” Gruber writes, “all other signs of iOS’s growth and vibrancy be damned, those investors cashed out.”

It remains unclear what plans Apple might have for its cash hoard.

However, propping up its stock value might be a good investment.