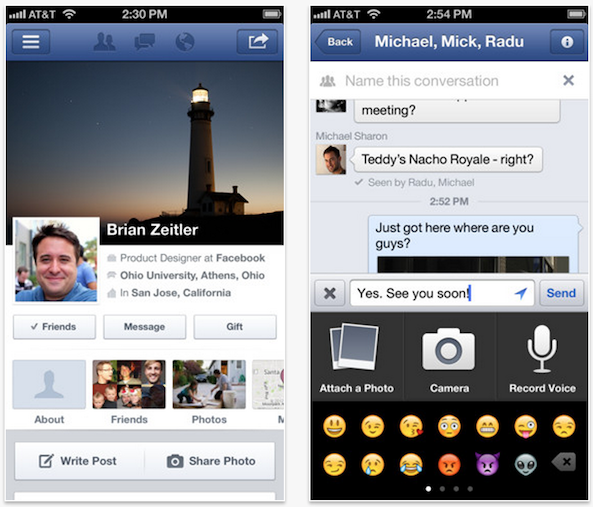 Facebook has released another update for its iOS app this afternoon, bringing it to version 5.6. This is the app’s third update in as many months, as the social network continues to improve its mobile experience.

Today’s update brings about a handful of improvements, including an easier process for updating your cover photo from inside the app and multiple changes to group messaging. Full change log after the fold…

Keep your timeline fresh by updating your cover photo on the go.
-Take a new cover photo or choose one from camera roll (iPhone only)
-Fewer taps to start a group message
-Easier to name and find group conversations

The improvements are fairly self-explanatory. You can now change your cover photo from within the app, by either choosing one from your camera roll, or taking a new one. And the group messaging UI seems better.

For those who want to take advantage of the improvements, you can find the update in, or download the Facebook app from, the App Store for free. It’s universal, so it will work with your iPhone, iPad or iPod touch.

Of course, we’re still waiting on the update that will bring about Facebook’s new Timelines it showed off earlier this month. At its media event on March 7, it promised it would roll out the change in the ‘coming weeks.’