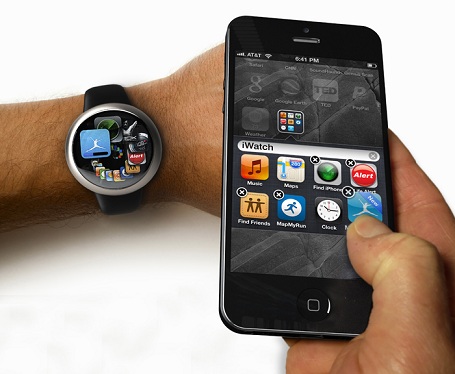 With the rumor-mill lately shifting into overdrive, pundits and tech watchers alike have been racing to guesstimate which one comes out first, an Apple-branded smartwatch or a standalone television set. And as established outlets like Bloomberg claim Apple’s rumored wearable device runs iOS (meaning it could be jailbreakable) while doubling as a health monitor of sorts, little wonder that market incumbents are getting a little worried, to say the least.

Their reaction of course is expected and understandable given Apple’s market power and street cred in the consumer electronics space. Enter watch maker Swatch, whose CEO took to Bloomberg to disparage the iWatch as a failure even before the non-existent device has had a chance to hit the market.

In his view, the Apple smartwatch won’t be revolutionary because mimicking the iPhone features on such a tiny wearable device is “difficult.” Rrrright…

Personally, I don’t believe it’s the next revolution. Replacing an iPhone with an interactive terminal on your wrist is difficult. You can’t have an immense display.

In addition to size limiting the amount of information that can be shown, consumers often buy watches as a jewelry item and like to change them, Hayek told the news organization.

This part is also interesting:

Swatch has had contact with Apple over many years about materials for products and so-called energy harvesting technology that would generate energy from physical movement, Hayek said today.

The Swiss company said in 2011 it obtained a license to use alloys made by Liquidmetal Technologies Inc. (LQMT) in watches, gaining access to metal that’s moldable like plastic.

Apple, based in Cupertino, California, also made a patent- licensing agreement with Liquidmetal.

Coincidentally or not, Microsoft principal researcher Bill Buxton during his talk at the company’s TechFest this week highlighted 37 years of smartwatches.

The Verge has his slide, seen below. 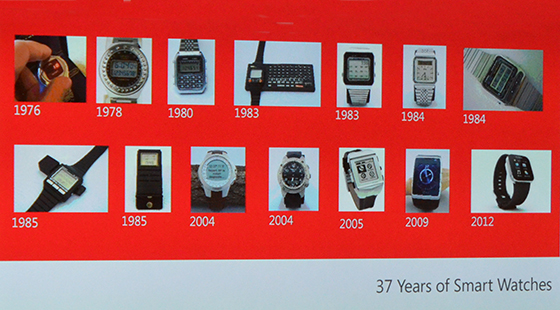 Mind you, Microsoft discontinued its own smartwatch platform dubbed SPOT in 2008.

Buxton, too, is downplaying the importance of smartwatches like the Pebble as a hype:

I’m not trying to say what’s going on today isn’t interesting, but it becomes actually more interesting if you drop the hype and view it in context in the history of things and see it as a continuum then you start to see how we’re doing and not get dazzled.

The comment gives me plenty of reasons to believe that Microsoft will re-enter the market with a brand new smartwatch or wearable computing platform of its own, especially should Apple’s iWatch becomes successful and with Google’s Android-powered Glass making waves.

Check out this Casio Touch Screen Calculator Watch from 1984, the year Apple introduced the Macintosh.

Bloomberg reported that Apple’s 100 engineers strong iWatch team is looking to add features like a pedometer for counting steps and sensors for monitoring health-related data, such as heart rates. Other features under consideration reportedly include letting users make calls, see the identity of incoming callers and check map coordinates. 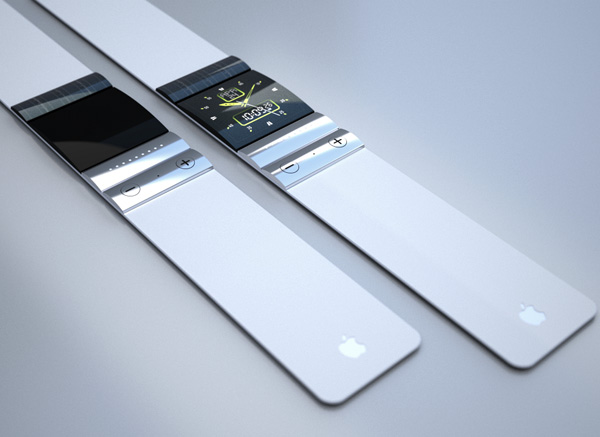 The Verge heard Apple chose to rework the full iOS to run on the iWatch, which poses battery life challenges. The team is ostensibly targeting 4-5 days of performance on a single charge, but prototype devices are allegedly only going for a couple days max.

As for the Swatch chief executive’s comment on the iWatch, all I can say is that history is repeating itself.

Recall, if you will, similar reactions after Steve Jobs took the MacWorld stage to announce the iPhone in January 2007. 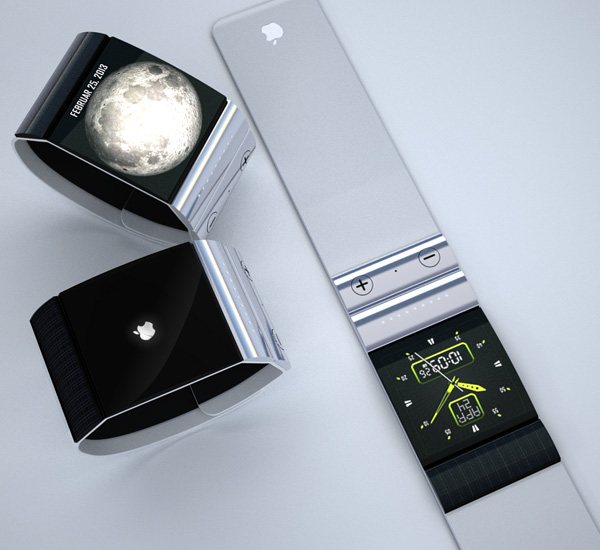 Established players like Research In Motion (now rebranded as BlackBerry) and its two ex co-CEOs dissed the iPhone saying there was no chance that a pocket-sized computer could possibly have a battery life of more than 2 hours.

Imagine their surprise when the iPhone came out and their engineers took it apart to find out that the phone is basically all battery.

All the iWatch concepts I’ve seen look either really unnatural or clunky. Hopefully they are as close as 2006 iPhones twitter.com/MichaelSteeber…

I’m saving Hayek’s comment for my claim chowder and will be happy to revisit it when the iWatch comes out and blows every smartwatch out of the water.

Did Hayek shoot himself in the foot by underestimating Apple’s expertise in creating popular portable devices?