It has already happened in the United States and now comes word 2013 will mark the date when smartphones outsell simpler so-called feature phones globally. More than 918 million smartphones such as Apple’s iPhone will ship this year, for the first time outnumbering feature phones.

According to research firm IDC, a nice 50.1 percent of mobile phones shipped this year will be smartphones, most destined for China. However, that small lead should widen greatly by 2017 as more emerging nations increase adoption of the powerful mobile devices…

China – which now is the largest smartphone market (and expected to become Apple’s #1 market) – will receive 301 million devices in 2013, according to IDC’s estimate, with the US projected as #2 with 137 million smartphone shipments.

Note that smartphones already dominate US handset sales and now the majority of the world’s markets is about to experience the same trend. The United Kingdom, Japan and Brazil will round out the top five countries for smartphone shipments this year, IDC predicts. 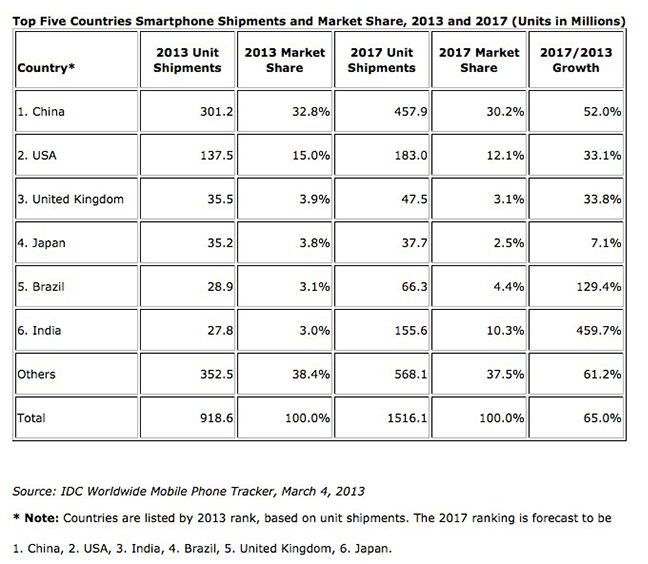 By 2017, smartphone sales should account for 75 percent of all mobile phones shipped, IDC researchers estimate. In other words, five years from today three out of each four handsets shipped will be smartphones.

While China and US will remain the top two markets, India in 2017 will experience a 459 percent growth, blowing past Brazil, Japan and the United Kingdom to become the third largest smartphone market.

Apple sales recently quadrupled in India. As you know, the company is rumored to launch a lower-priced iPhone for buyers in emerging markets, specifically BRIC countries (Brazil, Russia, India and China).

IDC suggests there likely won’t be much movement between Apple’s iOS and Google’s Android domestically. Instead, US smartphone growth will be among new operating systems, such as BlackBerry 10 and Windows Phone.

As for the Apple handset, the iPhone 5 and iPhone 4S control 21 percent of smartphone sales, meaning one out of five each smartphones sold is either the ‘disappointing’ iPhone 5 or the previous-generation iPhone 4S.