It looks like the rumors were true. Samsung sent out a press release last night announcing the launch of its new Galaxy Note 8.0. The 8-inch tablet is clearly aimed right at the iPad mini, which has done very well thus far for Apple.

And it certainly came prepared to play. As expected, the slate features a 1280×800 (720p) display—just a hair better than the mini—a quad core processor, 2GB of RAM, and oh yeah, it makes phone calls. More details after the break…

Here’s an excerpt from the press release (via 9to5Google):

“Samsung Electronics Co., Ltd, a global leader in digital media and digital convergence technologies, today announced the launch of the 8 inch tablet, the GALAXY Note 8.0; a new era of intelligent Note technology set to re-ignite the mid-size tablet category that Samsung established in 2010. Providing unrivalled multimedia performance within a compact one-hand-grip screen, the GALAXY Note 8.0 has the power and advanced technology to evolve the tablet experience and ensure you achieve new levels of efficient multi-tasking while benefitting from superb voice call functionality.”

In addition to the specs listed above, the Note 8.0 will also come with Samsung’s signature ‘S-Pen’ stylus, and a Micro-SD card slot for added storage. It won’t, however, support LTE—only HSPA+—and it’s running 5-month old software. 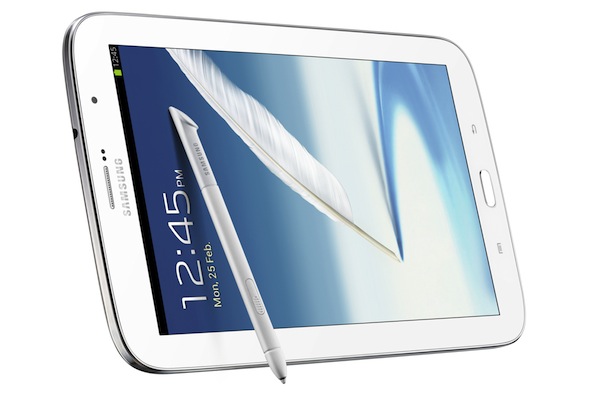 Samsung hasn’t named a launch date for the new tablet yet, or a price tag. And that last detail is particularly important because it will tell us exactly what market it’s going after. From afar all signs point to an entry below the $300 mark.

And if that ends up being the case, it’ll be really interesting to see how it performs against the iPad mini. Will the Note’s S-Pen and (still not sure how I feel about this) phone capabilities be able to throw some cold water on Apple’s hot tablet?

I don’t think so. Though Android is getting better in the tablet space, I think the iPad still wins on ease-of-use and app selection, which are probably two of the most important factors for mainstream consumers, outside of what it costs.

What’s your take on Samsung’s new tablet? What do you think of its ability to make phone calls?