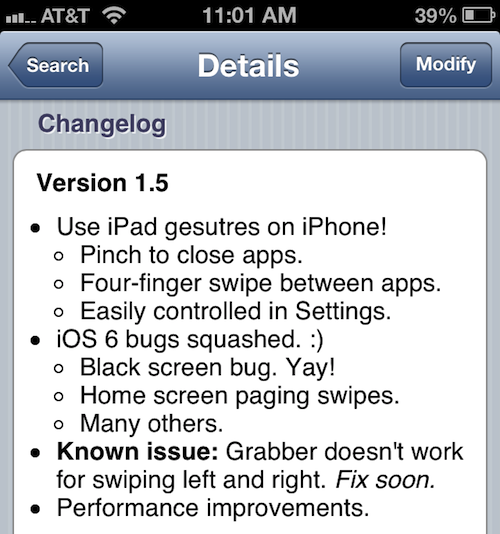 Zephyr is arguably one of the most popular jailbreak tweaks available on Cydia today—and for good reason. It’s easy to use, reliable, and it makes switching between applications on your iPhone a breeze.

Today, the tweak gets even better. Chpwn announced this morning that Zephyr 1.5 is now available with several bug fixes for iOS 6, and the ability to use the iPad’s four-finger gestures on your iPhone…

These options are now listed in a separate section of the Settings pane labeled ‘System Gestures,’ and can be disabled and enabled individually. Chpwn notes on Twitter that he added the section “just for fun.”

Sure, it’s hard to perform four-finger touch actions on the iPhone’s smaller screen—even the 5’s display. But all of Zephyr’s original gestures are still there, so you don’t have to use them if you don’t want to.

At any rate, Zephyr can be found in Cydia, in the BigBoss repo. The update is free for existing owners of the tweak, and $4.99 for everyone else.