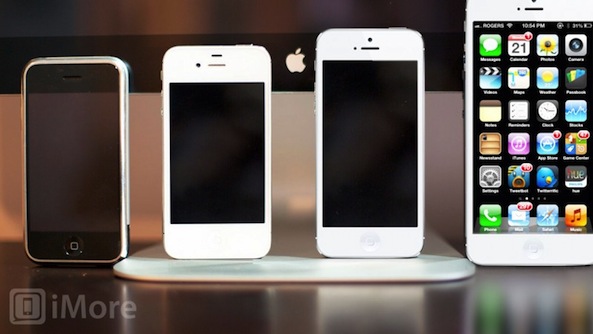 The rumor mill has been on fire over the past 2 months with talk of Apple’s next-generation handsets. And so far there’s been 3 recurring theories: an iPhone 5S, a ‘budget’ iPhone for emerging markets, and an iPhone 6 with a larger 4.9-inch display.

Well today we’re adding another point for the first and last theories. A new report out of China claims that both a familiar-looking iPhone 5S, and an all new iPhone 6 with a near-5-inch display have been spotted in one of Apple’s supplier factories…

“A source told Chinese mobile phone information site Laoyaoba.com that he has seen the iPhone 5S and iPhone 6 at Apple’s suppliers. Both models may be released in 2013, according to the website’s microblog on Thursday evening. The source noted that the iPhone 5S resembles the iPhone 5, and the five-inch iPhone 6 is lighter and thinner.”

Normally, we’d rank a rumor like this in the ‘crazy’ category. But this is, at least, the fourth report we’ve heard this year claiming that Apple is working on a larger handset. Digitimes, China Times, and iLounge all say that a near 5-inch iPhone is in the works.

In fact, the supply chain chatter has gotten so loud that folks have started speculating on how Apple could go about increasing the iPhone’s display size without causing further fragmentation in iOS. This scenario in particular has garnered a lot of attention.

Of course, none of this guarantees that we’ll see a larger iPhone anytime soon. The aforementioned reports are pretty foggy on the handset’s release date, bouncing between later this year and 2014. We’ll hold our excitement until we start seeing part leaks.

We are pretty confident, though, that we’ll see the iPhone 5S this year. The device is said to look almost exactly like its predecessor, and feature a higher resolution iSight camera and other internal updates. And we could see it as early as mid-summer.