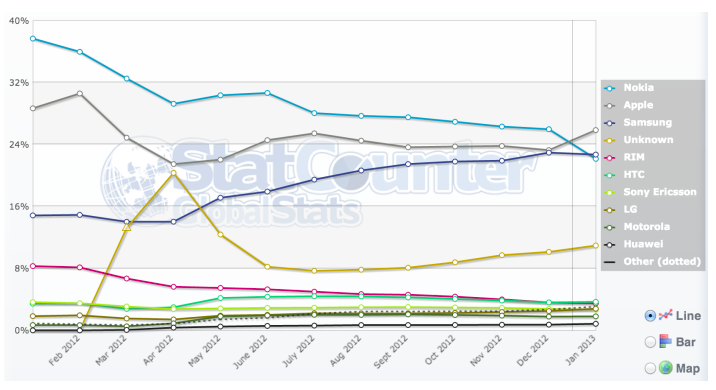 Apple yet again became the beneficiary of Nokia’s seemingly never-ending swan song, becoming the most-used mobile brand on the Internet in January. This despite Apple actually losing nearly three percent of mobile online usage. That the Finnish-based Nokia collapsed by more than fifteen points, dropping it out of first place to the third spot, also helped.

According to the independent website analytics company StatCounter, Apple had a nice 25.86 percent of mobile Internet usage in January 2013. Although that was a decline of 2.81 percent compared to the same month in 2012, Nokia’s share in the same period fell from 37.67 percent to 22.15 percent, a significant decline…

According to StatCounter, Android-based Samsung was the second most-used mobile device on the Internet, registering 22.69 percent in January, a 7.85 percent increase over the same month in 2012, according to the company.

The Android mobile OS had 37 percent of the January market, up from 33.19 percent in December of 2012. Meanwhile, the iPhone and iPod controlled 25.85 percent of the mobile OS market, an increase from 23.26 percent for the previous market.

It’s good and bad news for Apple. Apple has been handed the number one spot despite its falling usage share. A decline in Nokia usage from January 2012 to January 2013 means the Finnish company ceded the top spot to Apple.

January’s Internet usage ratings likely would have been different if StatCounter included iPads as a mobile device.

Competitor NetApplications recently announced rankings for iOS that factor in Apple’s tablet. In that report, Apple’s family of iOS devices had 60.56 percent of the mobile OS market while Android held 24.51 percent in January, as seen below.

In both instances, we are seeing the hardening of a mobile duopoly between iOS and Android.

All other contenders are fighting for the scraps.

The mobile version of Java had 9 percent and Nokia’s former Symbian OS had 1.78 percent.

The up-and-coming Windows Phone, you say? It had barely one percent of the mobile OS market. BlackBerry, formerly RIM, clings onto a 1.64 percent share.

The question is whether Nokia’s Lumia can stem the bleeding, allowing it to either pass second-place Samsung or pull close in the mobile Internet usage arena.