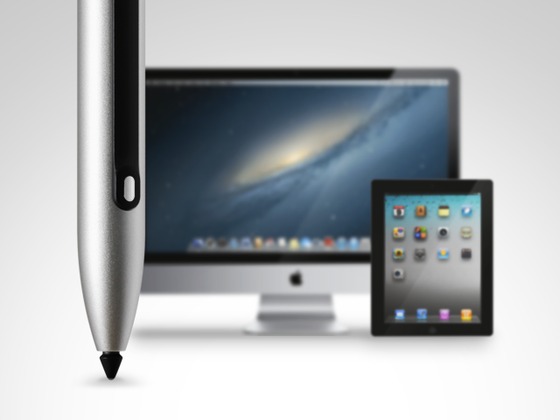 Despite Steve Jobs’ public disdain for styli—who can forget the infamous ‘who wants a stylus?’ line—the accessory has proven to be quite popular among Apple users. And if you’ve ever shopped around for one, you know the market is quite crowded.

But the folks at Cregle are hoping there’s room for one more: the iPen 2. That’s right, the team that brought you the original iPen for iPad are back with a much-improved stylus that works on a number of devices, including your iMac and Apple Display…

The iPen 2 is a pressure-sensitive stylus capable of recognizing up to 1024 levels of pressure. It uses strategically-placed receivers with tiny built-in cameras that capture invisible light emitted from the pen tip to triangulate its location. No Bluetooth here.

The stylus essentially comes in two flavors: one for the iMac and Apple Display, and one for the iPad. They are two separate products, each with their own receivers. On the Mac version, there’s two that attach to the screen, and on the iPad, it’s a full case.

Both versions appear to work great, but they have their limitations. On the Mac, pressure recognition is currently only supported in Corel Painter and Autodesk Sketchbook (it works as a mouse though) and there’s not even a list yet for iOS apps.

It has to be said that the iPen 2 comes with a bit of an asterisk. The original iPen took a lot of heat from customers for poor build quality and accuracy (read The Verge’s review). Cregle says it’s worked out all the kinks, and is even offering original iPen backers a chance to get an iPen 2 for just $55. But it’s worth noting. Obviously people still have faith in them, as they’ve raised over $200K.

Admittedly, the stylus looks impressive. But I probably won’t be pledging, just because I don’t think the tech is there and proven. I’m also not sure that I’m sold on the benefits of a stylus for your Mac just yet. I’ll stick with my Adonit Jot Pro for now.

What do you think of the iPen 2?